LIV Golf player Lee Westwood has urged the DP World Tour to make up their minds about the Ryder Cup "sooner rather than later." 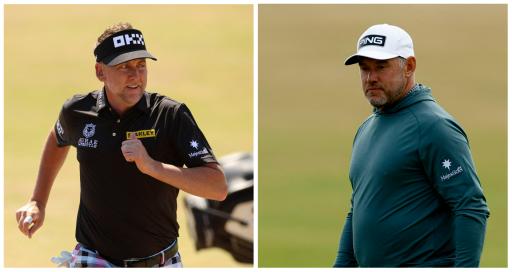 LIV Golf player Lee Westwood says he's hoping the DP World Tour make up their minds "sooner rather than later" over whether he and the fellow rebels will be able to qualify for the Ryder Cup.

Stenson claimed that he does not feel like he "gave up" the Ryder Cup captaincy, insisting that he made every provision with LIV so he could fulfil his duties in Rome next year.

But now it is looking increasingly likely that former World No.1 Luke Donald will be handed the role after the 46-year-old was stripped of the honour for signing up to the Saudi-backed series.

LIV is hosting their third event at Trump National in Bedminster, New Jersey, this weekend. Donald Trump played golf - off the back tees - with Bryson DeChambeau and Dustin Johnson.

More: LIV Golf with another gaffe at draft party

Westwood, the former World No.1 told the media: "I would hope that the European Tour would make a decision sooner rather than later.

Poulter, 46, added of the situation: "Yeah, I mean, we're not sure right now where the qualification criteria sits.

"I believe we're still all eligible to play. No decision has officially been made as far as I'm aware.

"I think the criteria is in three weeks' time, we start qualifying, but yet we still don't have a definite answer to what that is going to actually look like.

"So we haven't been given that level of information yet."

LIV Golf also this week announced their plans for 2023. The prize purses will be double that of their inaugural season, with $405million being competed for by the players in a league format comprising of 48 players.

That is up from the $255million they will play for in the eight-event season in 2022.

LIV will comprise of 12 established "team franchises" competing over a 14-tournament schedule.