Bryson DeChambeau says he has not spoken to friend Tiger Woods since he decided to join the LIV Golf series in a multimillion dollar deal. 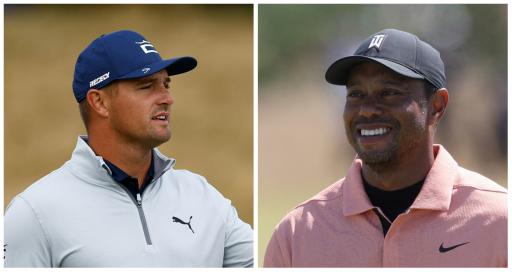 Bryson DeChambeau has opened up on his relationship with Tiger Woods after his decision to join the Saudi-backed LIV Golf series.

Unsurprisingly Woods, 46, has consistently spoken out in favour of the PGA Tour. He has previously questioned the incentive of players jumping ship.

Related: "If Tiger Woods and Rory McIlroy wanted to take down LIV Golf, they could" admits DP World Tour pro

In a broadside against the concept at the 150th Open at St Andrews, Woods spoke at length about not understanding the rebels' decisions.

"I don't see how that move is positive for a lot of these players in the long term," 82-time PGA Tour winner Woods said at the home of golf.

The 2020 U.S. Open champion even played in the Pro-Am alongside Donald Trump and former World No.1 Dustin Johnson.

DeChambeau was asked about Woods' comments and he reportedly credits the big cat for making something like LIV Golf possible.

Per a report by Sport's Illustrated's Bob Harig, DeChambeau said: "I have high regard for Tiger; look, this wouldn't be existing if it weren't for Tiger.

That huge opportunity that DeChambeau is alluding to is of course the lucrative, eye-popping multi-year contracts the LIV players have signed.

DeChambeau previously joked that it was "somewhat close" when asked if his deal was worth more than $120million.

Here's what DeChambeau has already spent his money on.

This week the tournament is offering $25million in prize money, with $20million going to the 48-players in the field. The winner gets $4million and last place is guaranteed $120,000. The other cash goes to the top three teams.

DeChambeau added: "I have ultimate respect for what he has to say. For me personally, to be my own human being, I'm going to work even harder to prove the fact that I'm worth the price.

"We have been fairly close and unfortunately we have not spoken, one day we will again, and I am always open for a conversation with anybody.

"I have no problem with it and I hope we can come see eye to eye on it."

He continued: "It's his legacy. I totally understand it. It's just a little bit of muddy waters right now."

What did Woods say about LIV Golf at The Open?

Woods was asked to clarify what he meant when he said LIV Golf Investments chief executive Greg Norman was doing things that wasn't benefitting the game of golf.

He said: "I know what the PGA Tour stands for and what we have done and what the Tour has given us, the ability to chase after our careers and to earn what we get and the trophies we have been able to play for and the history that has been a part of this game.

"I know Greg tried to do this back in the early '90s. It didn't work then, and he's trying to make it work now.

"I still don't see how that's in the best interests of the game. What the European Tour and what the PGA Tour stands for and what they've done, and also all the professional -- all the governing bodies of the game of golf and all the major championships, how they run it.

"I think they see it differently than what Greg sees it."