Viktor Hovland's first appearance at the Ryder Cup was very sobering as he, unfortunately, didn't win a match for Team Europe. 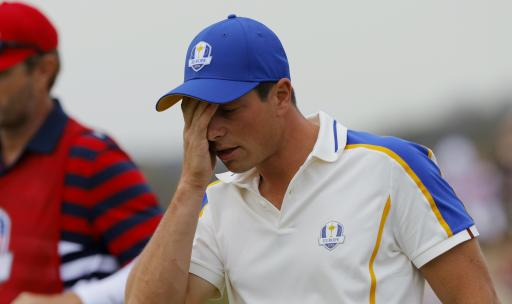 Viktor Hovland admitted that "it sucked" to lose the Ryder Cup in the fashion that Team Europe did. They were completely demolished 19-9 by America, which was a record win.

Hovland was one of the leading hopes for Padraig Harrington's team at Whistling Straits, ranked as the second-highest European player in the world, but even he could not hold back the American tide.

The Norwegian was paired with Paul Casey, Bernd Wiesberger and Tommy Fleetwood throughout each pairs session, with his only half-point coming with Fleetwood against Justin Thomas and Patrick Cantlay in the Friday fourballs.

However, he and two-time major champion Collin Morikawa had a fantastic battle in the singles. Although the half secured the winning points needed for the US victory, Hovland showed his class when battling against one of the best players in the world.

RELATED: HOW CAN I DRIVE THE BALL LIKE TIGER WOODS? HERE'S 3 OF THE BIGGEST DRIVER MYTHS

"The loss went over pretty quickly because it obviously wasn’t that close," Hovland said after his first round of the Shriners Hospitals for Children Open.

"If it came down to one putt that I missed on the last hole or something, that would have been tough to get over, but we got beat just by the better team and that’s how it goes sometimes.

"Obviously it sucked, but I try to learn from kind of everything that happens and try to turn it into something positive.

"Being on that team I’m surrounded by legends of European golf for the last 20, 25 years. So that was just incredible."

Hovland spoke about the Ryder Cup on Thursday after shooting a 4-under-par 67 in the first round of the Shriners Hospitals for Children Open.

The 24-year-old is six shots behind the runaway leader Sung Kang, who shot a superb opening round of 10-under-par at TPC Summerlin in Las Vegas.

Hovland is searching for the third PGA Tour victory of his career and his first win since the Mayakoba Golf Classic last season.

Ryder Cup
viktor hovland
Padraig Harrington
Whistling Straits
Tommy Fleetwood
Previous
How can I drive the ball like Tiger Woods? Here's 3 of the BIGGEST driver myths
Next
Golf rules: This player had a NIGHTMARE in the bunker, but what happens next?

Golf news
DEBATE: GolfMagic readers discuss their favourite major on Facebook & Instagram
Golf news
Golfer pauses longer than Hideki Matsuyama then SMASHES HIS TEETH with tee shot
Golf news
Could you pull off this AMAZING recovery shot through the trees?
Course news
Golf courses SHUT across United Kingdom due to Storm Arwen and DEEP SNOW
Golf news
WATCH: Could you play the Phil Mickelson BACKWARD FLOP SHOT like this?

DP World Tour
Matt Fitzpatrick labels Sheffield United owners PATHETIC after they sack manager
PGA Tour
How Jordan Spieth came back from the ABYSS, according to his long time coach
Golf news
Toptracer EMEA Sales Director gears up for MAMMOTH 24-hour charity world record
PGA Tour
Bryson DeChambeau on Koepka: "It's DISGUSTING how he has tried to knock me down"
PGA Tour
What clubs did Collin Morikawa use to win the DP World Tour Championship?