This is something we did not expect Jesy Nelson to be doing in her first solo music video... 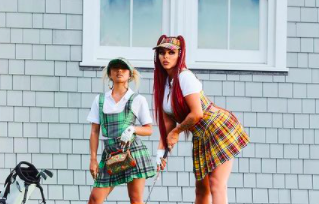 Former Little Mix star Jesy Nelson has released her first solo single 'Boyz' since splitting from the popular girl band which was formed on X Factor.

Reading that first sentence, you may think to yourself: "What on earth does this have to do with golf?" In normal circumstances, you would be correct in thinking that.

But in an unexpected turn of events, Nelson plays golf in the music video of the song. And in true Happy Gilmore style, she accidentally smashes a window of a house down the road.

This part of the video is truly reminiscent of the famous film, especially as Nelson has teed up the driver ready to smash it down the neighbourhood.

The song features contributions from popular rap artist and singer Nicki Minaj and Sean 'Diddy' Combs, or P Diddy. Unfortunately, these two superstars do not participate in any golfing activities in the video.

Nelson left Little Mix back in December and she attributes the mental health struggles from being in the band as the reason for leaving.

Golf is a sport that rarely crops up in music videos, so it was a pleasant surprise to see that Nelson has included our great game in her first solo single.

RELATED: THE BEST GOLF JACKETS FOR AUTUMN/WINTER FROM AMERICAN GOLF!

As we all know, golf is a universal sport and I am confident in saying that most people have either tried golf or been to a driving range.

Although its inclusion in Jesy Nelson's music video may be a bit of a curveball, it typifies the sport's popularity and who knows, maybe Nelson has been inspired to take it up on a regular basis?

NEXT PAGE: WATCH: PANICKED GOLFER RUNS AFTER HIS GOLF TROLLEY ROLLING DOWN A HILL!