Justin Thomas encouraged Bryson DeChambeau and Brooks Koepka to hug in the post-Ryder Cup media session in front of a jubilant US side. 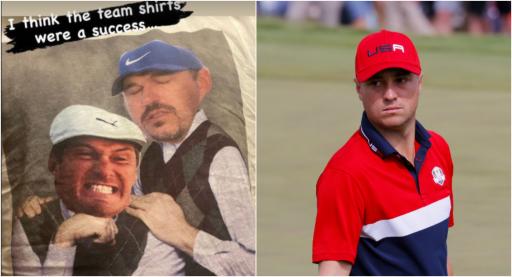 Throughout the week at Whistling Straits, Steve Stricker led a team that was happy, outgoing and engaging with the Wisconsin crowd.

Each player was prepared properly for the tournament and in a relaxed but focused mindset throughout the three-day event and this culminated in an absolute demolition job of Team Europe.

Justin Thomas was one of the key players in Team USA. Making his second appearance at the Ryder Cup, he was a key source of energy and vibrance, earning 2.5 points towards the 19-9 scoreline.

He joined Daniel Berger in necking a beer in front of the first tee crowd and he encouraged Bryson DeChambeau and Brooks Koepka to hug in their post-victory media session.

He wanted the two most spoken-about players of 2021 to embrace in front of their team, before singing 'Why can't we be friends', the popular song by Smash Mouth.

Earlier today, the 2017 PGA champion continued with the feud-based fun and posted a hilarious picture on his Instagram story of some interesting clothing.

He posted a picture of a t-shirt that had DeChambeau and Koepka's faces on it with a caption reading: "I think the team shirts were a success."

Before the Ryder Cup began, the major-winning American duo assured captain Stricker that there would be no issues between the pair and that their PGA Tour spat would not affect their Ryder Cup campaign.

The reduction in tension and truce between DeChambeau and Koepka was symbolic of Team USA last week. They were harmonious and happy and this was a huge factor in their success.

NEXT WEEK: AFTER HUMBLING DEFEAT, IS LEE WESTWOOD SET TO BECOME THE NEXT RYDER CUP CAPTAIN?