Justin Thomas on Team USA: "You would think all of us are BEST FRIENDS"

Justin Thomas explains just how strong the team bond and chemistry is among Steve Stricker's strong US team. 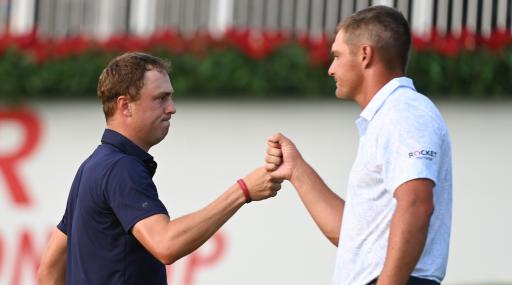 Justin Thomas has quashed any rumours of rifts in the United States Ryder Cup team by informing the media just how strong their team bond really is at Whistling Straits this week.

With the exception of Dustin Johnson and Tony Finau, the rest of Steve Stricker's 2020 US Ryder Cup team all grew up playing golf with each other.

"The brotherhood, the camaraderie, the moments and time spent in that team room is hard to explain," said Thomas, who is making his second Ryder Cup appearance this week after an impressive 4-1-0 debut at Le Golf National in 2018.

"Even nights like last night, just all getting together, you would think all of us are best friends the entire year.

"We hang out, all live in the same place, it's just a lot of fun.

"It's great for all the wives and girlfriends to catch up, it's great for the players, with the Tour Championship a couple of weeks ago, catch up on what they've been up to."

Thomas added: "It feels, not that we aren't friends off the course, it's just different.

"Not that we are forced to be in the same room together, but we are all eating in the team room, watching the game together, playing ping pong, signing the million flags that we have to sign... we are just doing all these things.

"We just don't have these opportunities in individual events as everyone has their own schedule or is arriving at different times.

"When we get together in normal events, we have the same relationship but we are not all together at one time.

"Those opportunities don't present themselves. Obviously it's not like all 12 of us are cross-legged in a circle talking about life, but we are all bopping around the room, catching up here and there. It's been fun."

Thomas is likely to be paired with his good friend Jordan Spieth for much of the week.

The World No.6 made an impressive debut at the Ryder Cup when taking four points from a possible five at Le Golf National in 2018, albeit it mattered little as Europe ran out 17.5-10.5 winners.

NEXT PAGE: BRYSON REVEALS "SOMETHING FUN" IS ABOUT TO HAPPEN WITH BROOKS