Justin Thomas was not best pleased with this journalist's question about Ralph Lauren at the Ryder Cup. 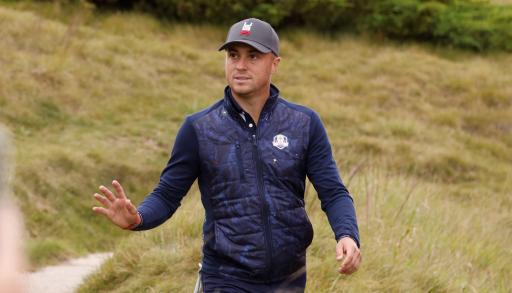 Justin Thomas fans were fuming on social media this afternoon after a journalist asked him what he made of having to wear Ralph Lauren apparel as a Team USA player at the Ryder Cup this week.

He apologised. He lost his deal. We all moved on. Or so we thought.

Despite all that happening nine months ago, a journalist in the Ryder Cup Media Centre today decided it would be a good idea to quiz Thomas on how tough it was going to be for him to wear Ralph Lauren at Whistling Straits this week.

RELATED: JUSTIN THOMAS IS WEARING THE SNAZZIEST PAIR OF RYDER CUP SHOES WE HAVE EVER SEEN!

"Justin, obviously you're having to wear the Ralph Lauren US team uniform this week... how was it handled in the background, were there any problems, any discussions, any distraction for you at all this week," said the journalist.

Thomas, who understandably looked frustrated having to answer the question, replied: "My priorities are a lot more than the clothes that I'm wearing this week. It's about trying to get a point for Team USA and earn as many as I can. It was never even a discussion until just now."

Here's how a number of Thomas fans reacted on Twitter:

Who’s the idiotic “journalist” that asked Justin Thomas if his Ralph Lauren clothes would be a distraction this week???

Journalists are so stupid. Dude asking Justin Thomas about wearing Ralph Lauren clothes. Give me a flipping break….

Justin shut the dude down the best he could.

Was the Ralph Lauren question necessary toward Justin Thomas?

Nine months on and Justin Thomas is still having to deal with Ralph Lauren questions. Absolute madness. Some of the questions being posed to the players by the golf media today were honestly embarrassing #RyderCup

Immediately after his round back in January, the World No.6 apologised for his choice of words and then later admitted to the incident "taking its toll" on his performances on the PGA Tour - READ HERE

"There's just no excuse," said Thomas after his round.

"There's absolutely no reason for me to say anything like that. It's terrible. It's not the kind of person that I am."

After being dropped by Ralph Lauren, Thomas has been wearing Greyson polo shirts out of choice, although we are led to believe a potential deal with the brand is in the pipeline.

Thomas still wears a Titleist cap, as he is still signed with the brand on a club and ball deal, while on his feet he still rocks FootJoy golf shoes, as one of the many PGA Tour players who has a deal with the No.1 shoe brand in golf.