Luke Donald emerges as favourite to take Ryder Cup captaincy, but is the captaincy all that important? 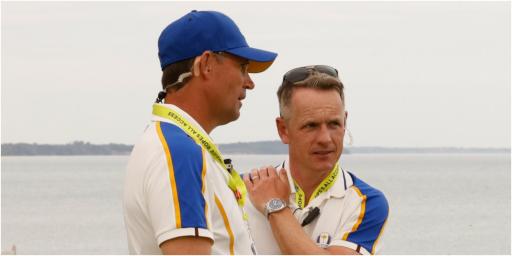 The issue of the Ryder Cup captaincy always seems to divide opinion.

Not in who is chosen as the captain but whether or not the job is all that important.

Given Europe's propensity to dominate the action on their home turf, it's absolutely not outside the realms of they'll win easily.

Afterall, the proof is in the pudding. The stats back up this theory which begs the question: does it actually matter?

While the next instalment is not until next September, there have been some rumblings in the European camp recently.

We have also been treated with this delightful image:

More: Could the Ryder Cup be heading to Bolton?

According to the DailyMail, Luke Donald has emerged as the person most likely to take charge in Rome next year.

An exclusive report reveals Donald, 44, had the overwhelming "ringing endorsement" by the five-man committee that chooses the next boss.

Lee Westwood was touted as the favourite but he still harbors aspirations to play in Rome and has distanced himself.

Henrik Stenson appears or at least appeared to be issued an ultimatum about his potential future choices.

If Stenson doesn't take it should he be offered the role, it means that he's likely passed over for when they play in the Unite States next.

There's also Sergio Garcia and even Graeme McDowell also in the pecking order at some point.

By 2025, they'll likely have reached the point in their careers where playing isn't reasonably an option.

Robert Karlsson has also been touted while there are whisperings of Thomas Bjorn going again.

Donald would no doubt be a fine choice. He's never tasted defeat as a player and as former world number one would command respect.

But the role always seems to be a poisoned chalice.

In my opinion, you'll get much more blame if you lose and much less credit if you win.

Next page: Webb Simpson on his Ryder Cup captain dream