Elgin Golf Club was the subject of a late night attack but the perpetrator(s) left the greens alone... 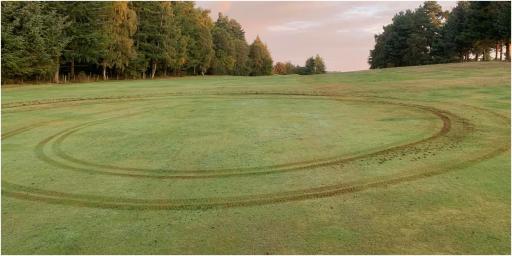 A golf course in Scotland was attacked by vandals late at night over the weekend leaving several fairways ripped to shreds.

Elgin Golf  Club posted the images on their Facebook page showing the aftermath that has torn up the fairways leaving muddy tyre tracks.

The incident reportedly happened a few nights ago on Saturday, 9 October between 10pm and 5.30am.

They believe a pickup truck caused the damage judging by the tyre tracks left across the course.

Whoever committed the offence decided to leave the greens alone for the most part.

A post on their Facebook page from one of their greenkeepers read: "They have driven most of the course but that’s where the main damage is.

"I followed the route this morning as I could still make it out in the dew.

"They seem to have made an effort to try and stay off the greens for the most part which is unusual in these cases."

An updated post has revealed that there was a sighting of the vandalism at around 11.55pm.

A Police Scotland spokesperson said: "Anyone with information that may assist the investigation should contact Elgin police station through 101, quoting the reference number 1373 of October 10."

"What on earth is wrong with some people?" one wrote.

The club was founded in 1906 and is situated in Moray and Speyside.

It is seen as a great track in the north of Scotland with fantastic views of the Cairngorm Mountains.

NOW WATCH: IS THIS ONE OF THE CRAZIEST PUTTS YOU HAVE EVER SEEN?