Harrington has suggested the fact many people had assumed he was going to pick Shane Lowry pushed him away from the Irishman. 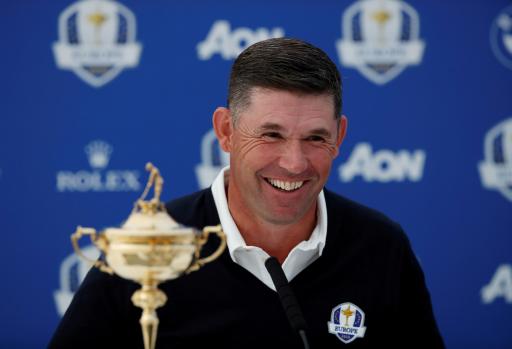 Team Europe Ryder Cup captain Padraig Harrington has said he double checked with his vice-captains about the inclusion of Shane Lowry as a wildcard pick as he was afraid of being biased.

It was Justin Rose who was the big name to miss out, with several fans and pundits expressing surprise and dismay, while others have suggested the former World No. 1 only had himself to blame after another average season.

Harrington was said for many weeks to have been unwavering in his decision to pick Ian Poulter and Sergio Garcia, whom he has described as the heart and the soul of many successful Ryder Cup sides.

And he did face a tough decision on Sunday afternoon, with Rose shooting up the leaderboard and Lowry dropping off in the final round - much like Lee Westwood at Wentworth, shooting over-par for the round and level for the tournament.

Paul McGinley, who famously sank the winning putt for Europe at the Belfry in 2002, came to Harrington's defence and suggested Lowry has done more than enough to earn his selection, saying the former Open champion has been one of the best performing Europeans on the circuit.

RELATED: WHY IT IS A DISGRACE JUSTIN ROSE WAS SNUBBED

"I'm just incredibly proud of what I have achieved. But there's no point going over there to make up the numbers. I want to win points and help bring the cup back."

And Harrington has been speaking to the media about his decisions that have given him what he described as one of the best ball-striking teams Europe will ever field against statistically the strongest ever U.S. side.

"It actually made it harder for Shane to get in the team. I had to keep checking with the vice-captains. You know, I’m not biased here. This is right. Don’t let me be distracted here because Shane is my friend.

"It was with the support of the vice-captains I was able to give him the nod and I was thrilled with that.

"There’s downsides to this job, having to tell the guys that weren’t getting the picks, but having to tell Shane that he got the pick was a big thrill of mine that he is a friend of mine and knowing that it was the right thing to do, it wasn’t me being unconsciously biased."

Lowry said he was sitting in the players' room at Wentworth when Harrington called him into the "principles office" to tell him he was going to be playing for Europe, before giving him a hug.

"It was obvious a very special moment," he said.

Lowry has said he is not going there to just "make up the numbers".

"I've said that all year, I wanted to make the team, but I want to go over there and win," he told Sky Sports.