"I am glad I got a point on the board for Europe but I just can't wait to get another shot at this." 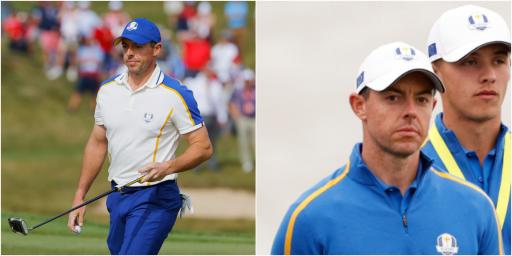 Rory McIlroy was reduced to tears as he painfully admitted he should have done more to help his ageing European army.

But his performance on Sunday should not go unnoticed and washed away without ever being referred to ever again.

Europe's hopes of overcoming the United States juggernaut effectively hung on his shoulders and while he stepped up his team-mates couldn't get anything going.

RELATED: RORY MCILROY - "IT SUCKS, BUT IT MAKES GETTING THE RYDER CUP BACK EVEN SWEETER"

McIlroy's dogged and gutsy performance against at the time a 3-0 Xander Schauffele showed us why we will always root for him.

There was a moment on the back nine at Whistling Straits where McIlroy demonstrated why he will always be a fighter.

Up by two holes against Schauffele the Northern Irishman had a birdie putt to take the lead by three and shut the door on the Olympic champion.

After holing the putt his outburst was full of emotion that was lacking over the first two days as his shoulders had been slumped and he looked dejected.

An important putt by Rory McIlroy in the top match #TeamEurope #RyderCup pic.twitter.com/aFZ9bO1Cgb

McIlroy will always have his critics because that is how the media machine has and always will work.

But he went part-way to proving why you should never write him off.

He wants to be a part of this competition for many years to come.

"I couldn't give a s**t," McIlroy said of his personal achievements in comparison to the importance of the Ryder Cup.

"I have never really cried or got emotional over what I've done as an individual," he said. "I've said naive and stupid things in the past but this is by far the biggest tournament that we have in golf.

"You look at the crowds. You look at what it means, it's the best. I can't wait to be a part of many, many more Ryder Cups and be team-mates with some of these great guys and try to win many more."

NOW WATCH: TEARFUL RORY ADMITS HE SHOULD HAVE DONE MORE