Dustin Johnson to SHARE A BED with Collin Morikawa | Will Paulina Gretzky mind?! 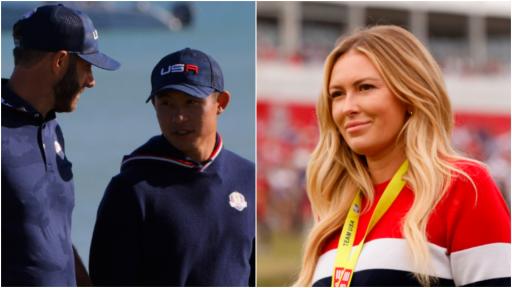 Dustin Johnson is typically great value when it comes to a press conference on the PGA Tour, but throw in a couple of beers and some champagne after a Ryder Cup and the man is quite simply comedy gold.

Fresh off entering the record books by going 5 and 0 at the Ryder Cup as Team USA dismantled Europe by a record 19-9 scoreline, Johnson and the rest of the team sat in front of the media to give their verdict on the week.

Journalist just asked Dustin Johnson if he will sleep with Collin Morikawa like Moliwood did in 2018: “If you want me to, I’m not scared.” #RyderCup pic.twitter.com/f1HM69WxCe

Everyone was understandably in buoyant mood following the win, but none more so than DJ, who was keen to constantly get on the mic.

One journalist said: "So DJ, I want to know, as Tommy Fleetwood and Francesco Molinari enjoyed such a successful partnership in Paris back in 2018 they ended up sharing a bed together.

"I wondered whether you and Collin [Morikawa] would do the same given how well you guys played together this week?"

Without any hesitation whatsoever, Johnson replied: "If you want me to, I'm not scared."

RELATED: "DUSTIN TOLD ME ABSOLUTELY NOT TO PLAYBOY" - PAULINA

Johnson was then asked how much of a lift it gave the team when they all saw rookie Scottie Scheffler take down World No.1 and Europe's best player in Jon Rahm in the Sunday Singles (4&3).

"It was amazing to see that, I told Scottie before he went out to go and put it to him," said Johnson.

"Jon was one of their leaders and is the No.1 player, he was unbelievable this week.

"One thing that could really push the US team was Scottie beating their best player. It was huge so I want to give him a lot of praise."

Spieth then added: "We were all looking up at the board and to see that was just amazing."

Johnson chipped in again: "That was the only thing I was looking at to be honest [laughs]."

Johnson was then asked whether as the oldest player in the Team USA lineup if he would have to stamina to out party the rest of the team.

"Abso-****-lutely," he responded, before saying "next question" repeatedly.