Ryder Cup 2020 VERDICT: "This is the GREATEST US Ryder Cup side of all time"

Team USA prove their class at the Ryder Cup as they land a record 19-9 victory at Whistling Straits. 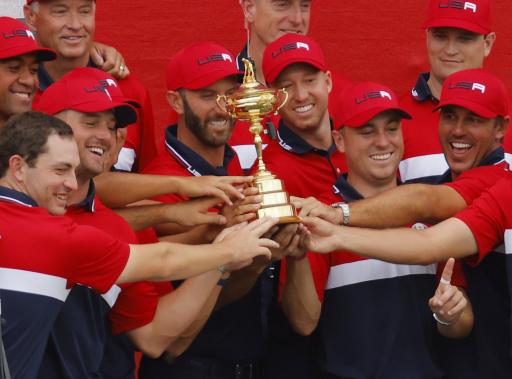 Out with the old and in with the new. No more Tiger Woods, no more Phil Mickelson, no more heartache at the Ryder Cup.

Team USA were left battered and bruised last time out in Paris, suffering a humiliating 17.5-10.5 defeat at the hands of Team Europe.

Players fell out, accusations were thrown about captaincy and pod systems, and even two players, allegedly, came to blows.

It was all a bit of a mess. They were even forced to sit and watch Ian Poulter celebrate as a letter box.

Fast forward three long years, and while controversy still surrounds the US side largely down to Bryson DeChambeau and Brooks Koepka, they finally have a team that has delivered on its promise.

Steve Stricker's stars and stripes were truly first class at Whistling Straits this week, and every player in their roster proved why they currently find themselves in the top 21 in the world rankings.

They even decided to play as a team for once, no doubt helped by nine of their 12 players having grown up playing golf together in their college days.

No individuals this time, just good vibes. And that was reflected in their golf.

Oh, and Tiger and Phil were there as backroom staff.

These current US rookies were no ordinary rookies.

No scar tissue probably helps, but all of them bar Scottie Scheffler have won multiple times on the PGA Tour.

Patrick Cantlay has a FedEx Cup to his name, Collin Morikawa has two majors, and Xander Schauffele has an Olympic gold medal round his neck.

That speaks a lot when you look at the final score.

RELATED: JORDAN SPIETH AND JON RAHM'S CADDIE IN BUST UP AT THE RYDER CUP

Don't get me wrong, their 17-11 victory under Paul Azinger at Hazeltine National was certainly impressive five years ago, but the standard of golf from USA this week was on another level.

Out the blocks early and into a 6-2 lead on Day One, aided by going 20-under par in the foursomes session, USA then added another five points on Day Two to move into a commanding 11-5 lead heading into the 12 Sunday Singles matches.

It marked the largest lead Team USA had ever held over Europe in the modern era (1979) heading into the singles.

The United States needed three and half points to regain the Ryder Cup.

They ended up with eight.

Shane Lowry's passion on the 18th green late on Saturday was something to be admired, landing his first point at the Ryder Cup and then signalling his belief that a European win was still on the cards.

But let's all be honest, it was all over.

The damage had been done on Friday and Saturday and there was never going to be any Wonder in Wisconsin.

In my eyes, we have just witnessed the greatest US Ryder Cup team of all time.

Each and every one of Stricker's 12 men turned up, and they all played their part.

The same sadly cannot be said for Europe.

Some questioned the nod to Scheffler, especially without a win on the PGA Tour, but he quashed all that when teaming up manfully with DeChambeau in the fourballs and then taking down World No.1 Jon Rahm in the singles 4&3.

Even old-timer and former World No.1 Dustin Johnson went 5 and 0 to etch his name in the record books and repeat the feat of Francesco Molinari at Le Golf National.

European fans can argue about not picking Justin Rose, the erratic form of McIlroy, the constant inclusion of Paul Casey, dropping Tommy Fleetwood from the foursomes, and seeing Lee Westwood twice partner up with Matt Fitzpatrick all they want.

But at the end of the day, Europe were played off the park for three days.

None more so in the Singles on Sunday where they were trounced.

Mcllroy was sent out in the first game and delivered the first blue point of the day, but knowing there was a sea of red tucked in behind, the Ulsterman knew the race was run.

He then burst into tears during his interview with Sky Sports at the side of the green and apologised for taking just one point from four.

But with all due respect, the four-time major champion could have brought his A-game to Wisconsin and the end result would have been no different.

Ian Poulter and Lee Westwood also chipped in with a point, possibly in their last ever Ryder Cups, and Tommy Fleetwood and Viktor Hovland clinched halves.

But this was all about USA.

They wanted payback for Paris, and they got it and more.

Prior to this week's Ryder Cup, the record US points tally stood at 18.5, last achieved by Dave Marr's US side at Walton Heath in 1981.

Europe also twice achieved the feat in consecutive years, first under Bernhard Langer at Oakland Hills in 2004, and then again under Ian Woosnam at The K Club in 2006.

But Stricker's side were not interested in any of that.

They sensed an opportunity for the outright record, and took it.

Aided by Fitzpatrick dunking it in the water at 18 to hand the final match to rookie Daniel Berger, the final score ended 19-9 and it meant Team USA deservedly had their place in history.

As a European myself, I genuinely fear when the Ryder Cup will next return home.

This is a young, fearless American team that is only going to improve over time.

Even Tiger and Phil must wish they played in this one.

NEXT PAGE: EUROPE NEARLY DOWN AND OUT AS THEY TRAIL 11-5 HEADING INTO SUNDAY