Ryder Cup 2021: Get to know the VICE-CAPTAINS headed to Whistling Straits

Get to know the vice-captains assisting Padraig Harrington and Steve Stricker in Wisconsin. 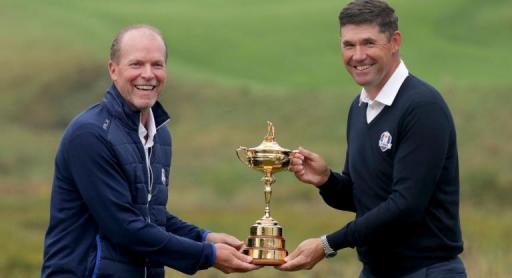 Rory McIlroy may not think there is much importance on the role of a Ryder Cup captain.

After all, they don't hit the shots, he has been quoted as saying by several media outlets over the past few months.

But what about the vice-captains? The winning captain usually gives them a huge amount of credit.

They're in the fairways talking to the players, making speeches, scrutinising every decision.

It's an important job.

There is so much talent on both sides with their vice-captains, with men who have won and lost many Ryder Cups over the years.

They've sunk winning putts, been on the wrong side of a crushing defeat or snatched a victory when all hope looked lost.

But who are they this year?

GolfMagic decided to take a closer look and let you know who will be helping Padraig Harrington and Steve Stricker's respective sides.

He has taken 10.5 points off the Americans.

Was instrumental as part of Thomas Bjorn's winning side at Le Golf National in 2018.

"He doesn't let the emotions get involved."

Has made four appearances at the Ryder Cup.

Was vital at Medinah in 2012 when he defeated Steve Stricker on the 18th.

Kaymer has an aura and responsibility and what he says will have meaning, Harrington said.

Defeated Hunter Mahan in 2010 to help Europe recapture the trophy.

Harrington said: "The only reason he would not have been a vice-captain was if he was going to be a player."

Holed the winning putt at The K Club on his debut.

A major winner with 11 wins on the European Tour, the Swede had a poor season and should have been a player.

Harrington said: "He knows what it takes to win a Ryder Cup and that experience and knowledge will be crucial for us."

RELATED: BUTCH HARMON TELLS BROOKS AND BRYSON TO SUCK IT UP

Was the captain at Le Golf National in Paris three years ago.

Brings a wealth of experience to the side and only Phil Mickelson has played more Ryder Cup matches.

Has played in five Ryder Cups and his second stint as vice-captain after serving Furyk in Paris.

Then Johnson went on to batter rookie Matthew Fitzpatrick in the singles 4&3.

Played in six as a player and captained the team twice.

The first was the crushing defeat at Medinah, but he evened the score at Hazeltine in 2016.

An icon for golf and a giant figure in United States Ryder Cup history.

Has been on the winning side on three occasions.

The first time in 25 years he isn't playing.

Played in five Ryder Cups and is a natural fit to be a captain at some point.

Love III said: "People see Freddie, he makes it look so easy, and he's got this nice swing, and he's always smiling and waving.

"But what's going on in his head is completely different. He really has a lot of pride in his game."