There was a shout heard of "get in the water" aimed at Paul Casey on the third hole at Whistling Straits. 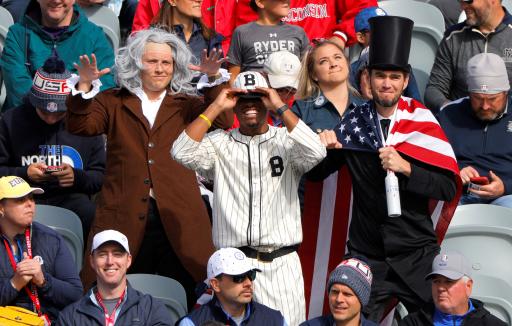 In the early stages of the first day of the Ryder Cup, the US fans have received a lot of criticism for their behaviour during the Friday foursomes.

As this is an extremely different Ryder Cup due to the Covid-19 pandemic, there are very few European fans at Whistling Straits, so the home crowd will be at their loudest and rowdiest this week.

However, some golf fans have reported bad behaviour from some of the spectators and expressed strong views against them on social media.

It is said that when Paul Casey hit his tee shot on the par-3 3rd hole, a spectator shouted: "get in the water" at his ball. On the contrary, the Englishman almost made a hole-in-one.

RELATED: BOY, 11, HITS TWO HOLES IN ONE IN THE SPAN OF SEVEN HOLES AT JUNIOR TOURNAMENT

He and his partner Viktor Hovland won the hole to go all square with Dustin Johnson and Collin Morikawa.

There have also been shouts heard of "get in the bunker". These are the key reasons why some golf fans have been critical of the hostile American fans in Wisconsin so far.

The Ryder Cup is known to be a tribal event and the only event in the sport where you regularly experience cases of hostility and on occasion, a lack of sportsmanship.

RELATED: IS BRYSON DECHAMBEAU CHANGING PERCEPTIONS AT THE RYDER CUP?

Take a look below at what some golf fans have had to say about some American spectators:

The US golf fans’ idea of sportsmanship coming to the fore early this year. Booing the Europeans and we’ve just had a ‘get in the water’ shout to a shot by Casey. Pathetic but #par for the course. Heard a lot of it at Valhalla #RyderCup

We’re only 40-odd minutes into the Ryder Cup and we’re all royally pissed off with US golf fans.

Three days of this will be painful. https://t.co/GuFy75hzET

See or rather hear the US golf fans at the Ryder Cup are showing themselves up in sportsmanship as usual. Gentleman's game unless in US. #RyderCup

NEXT PAGE: RYDER CUP OFFICIALLY BEGINS WITH THE OPENING CEREMONY AT WHISTLING STRAITS