Ryder Cup captains Luke Donald and Zach Johnson have touched down in Rome to mark the "Year to Go" festivities at the Marco Simone Golf & Country Club. 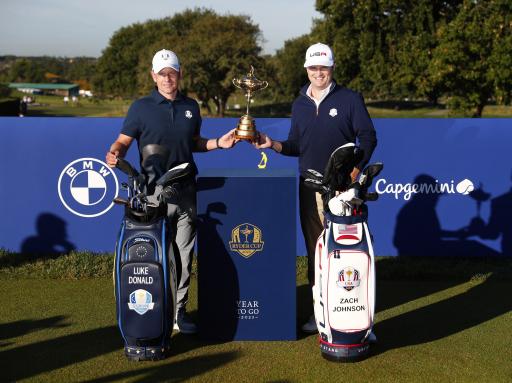 The countdown to the 2023 Ryder Cup at the Marco Simone Golf & Country Club has officially begun as captains Luke Donald and Zach Johnson touched down in Rome for the "Year to Go" festivities.

Although Donald, 44, might have an idea of who he would like to pick for his side he remains largely clueless about which players will be attempting to wrestle back the Cup after the Europeans were humbled 19-9 at Whistling Straits last September.

His preparations have and will likely continue to be hampered by the LIV Golf Invitational Series. Rory McIlroy's friendships with some players have reportedly broken down. Donald has already touched on this after taking over from Henrik Stenson when he joined LIV.

Donald said before the Italian Open: "We're still a little bit in limbo. We don't know what's going to happen with the lawsuit so I'm trying to not really put too much energy. Once we get a clearer picture, I can give you better answers."

McIlroy also said at the Italian Open: "I don't think any of those guys should be on the Ryder Cup team."

A court case in February will determine if players who have participated in LIV events can continue competing on the DP World Tour and therefore be eligible for selection.

Ryder Cup Europe have already announced changes to their qualifying criteria, meaning that Donald will have six captain's picks at his disposal.

Donald previously said of the changes: "The revised overall process removes the need for points multipliers in the last few months of the qualifying period, and the six picks give me flexibility to ensure we have the strongest line-up at Marco Simone in terms of in-form players, players with Ryder Cup experience, and potential pairings.

"As far as the European Points List is concerned, modifying the points allocation will give an improved chance for DP World Tour members playing predominantly on the DP World Tour to make the Ryder Cup team through one of the now three spots available from that list.”

Despite this distraction, Donald and Johnson were all smiles as they met junior golfers in Rome on Monday.

They also posed with the trophy:

As for Johnson, his position seems to be a little bit clearer. The PGA Tour has suspended the players who have teed it up in LIV Golf Tour events, meaning that they are ineligible for selection.

Speaking in June, he said: "In order to play on the Ryder Cup team whether you're top six or a pick, you must garner Ryder Cup points through the PGA of America.

"I'll let you connect the dots from there."