Watch as the likes of Ian Poulter, Jon Rahm and Viktor Hovland star in this hilarious clip. 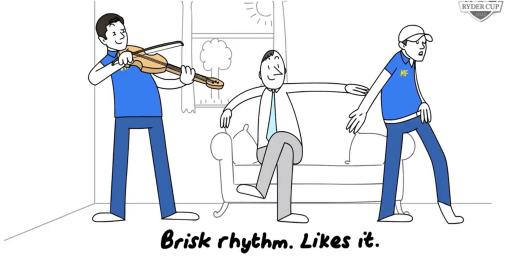 The Europeans may have taken an early lead and we haven't even seen a tee shot at the Ryder Cup.

We're talking about the European Tour's creative social media team who have come out with another belter.

Over the years we've seen many hilarious spoof videos with the Tour's finest players parodying warped versions of themselves.

From brainstorming viral videos to angry golfers in an Office-style mockumentary - the Europeans have a great sense of humour.

And with the Ryder Cup only a matter of hours away their creative team have got us in stitches again.

You can take a look at the video below:

It's already an instant classic and nothing less than what we would expect to see from the European Tour.

The video was reportedly played to the European team ahead of their first practice session.

We're not sure how the players reacted doing everyday tasks such as rocking a baby to sleep, milking a cow or playing the violin badly.

The Americans are not shy of posting comical content on their channels.

They released a clip earlier with Phil Mickelson playing a hype man while Bryson DeChambeau hit a tee shot.

While they also posted a clip with DeChambeau and Brooks Koepka on the range at Whistling Straits getting pumped up.

NEXT PAGE: G-MAC QUESTIONS WHY US CHOSE WHISTLING STRAITS