John Daly couldn't contain his anger when he put three balls in the water on the 7th hole at Whistling Straits six years ago. 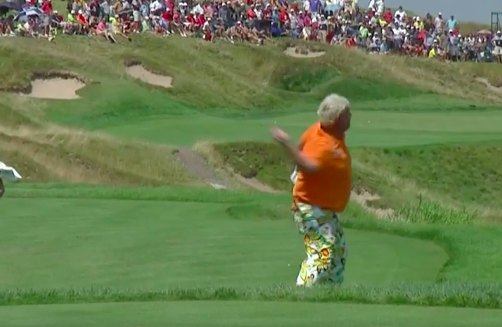 John Daly will always hold a special place in the history of the PGA Championship after his amazing victory at Crooked Stick in 1991.

Despite qualifying as the ninth reserve and having never played the golf course before, Daly won the tournament by three shots and it was also his first win on the PGA Tour.

'Wild Thing' immediately turned into a fan favourite by showing them his flamboyant, big-hitting style and this also led to his second major win at the 1995 Open Championship.

However, the former USPGA champion has not tasted victory at the tournament since and in 2015, he made headlines for all of the wrong reasons.

The championship returned to Whistling Straits and after a first-round score of 73, Daly was in with a chance of making the cut in Wisconsin.

My fondest memory of whistling straits will always be John Daly firing his club off into the lake on the par-3 7th after putting three in the water. Oh, and then a kid on a boat went out and got it. you gotta love golf. https://t.co/HyI34hBEvT pic.twitter.com/9sCG3Ny5YK

However, he arrived on the tee box of the par-3 7th hole in the second round and he was about to blow up in an unprecedented manner.

The 55-year-old hit his first three tee shots right and into Lake Michigan. It was a series of shots that you would only associate with a club golfer. Daly managed to keep his fourth shot above ground and he went on to make a 10.

After the man from California finished his antics on the tee box, he walked forwards and threw his six-iron into Lake Michigan, joining his first three tee shots.

Luckily for one young boy, he was in a boat near to the course and he managed to fish out Daly's club for him to keep. The crowd cheered as the boy had picked up an unexpected memento for the week.

He went on to shoot an 82 which meant that he missed the cut. As Daly won the PGA Championship in 1991, he will always be able to return to the event, much to the delight of many golf fans.