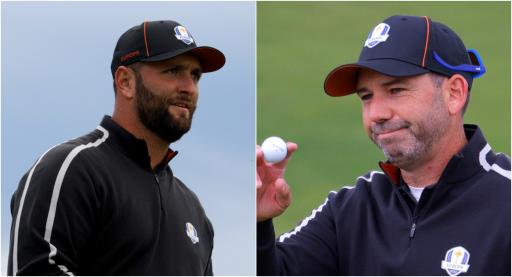 World No. 1 Jon Rahm and Sergio Garcia have been paired together for the Friday morning foursomes in the first session of the Ryder Cup.

European captain Padraig Harrington has opted to send the Spanish pair out first and they will face the American duo of Jordan Spieth and Justin Thomas.

Rahm and Garcia played together in their practice group on Wednesday and there was much speculation as to whether Harrington would pair them together tomorrow.

Garcia, who is the event's all-time leading points scorer, is making his 10th appearance at the Ryder Cup while Rahm is making just his second appearance.

RELATED: WILL THE UNITED STATES REGRET NOT PICKING PATRICK REED AT THE RYDER CUP?

In the second match, Paul Casey and Viktor Hovland will play against Dustin Johnson and Collin Morikawa, and Lee Westwood and Matt Fitzpatrick will face off against Brooks Koepka and Daniel Berger in the third match.

Hovland is making his debut at the tournament and he is the first Norwegian to play in the Ryder Cup, while Casey is making his fifth appearance for Team Europe.

Johnson and Morikawa have four major championships between them and at number two and number three in the world rankings, they pose a strong threat in the second match.

In the fourth and final match, Rory McIlroy and Ian Poulter will come up against Patrick Cantlay and Xander Schauffele, who played together in the 2019 Presidents Cup.

McIlroy and Poulter were the pair to spark Europe's comeback in the 2012 Ryder Cup at Medinah and they have also played together in 2014 and 2018.

The opening match of the Day One Foursomes will start at 7.05am local time (1.05pm UK time).