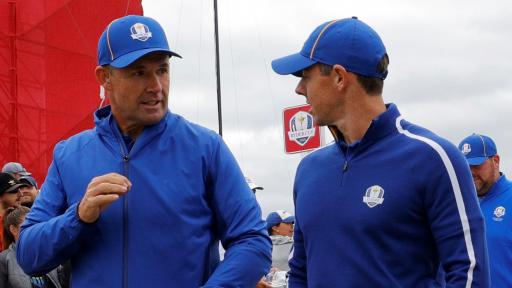 Ronaldo, who recently returned to Manchester United where he has scored four goals in the last three games, performs a mid-air pirouette before exclaiming 'siu' (Spanish for 'yes') upon landing.

WATCH RORY AND SERGIO GIVE IT A GO!

This video of Cristiano Ronaldo’s second goal and celebration vs Newcastle pic.twitter.com/BxTuJEOojW

McIlroy was understandably keen to give the celebration go as he is an avid Manchester United fan, while Garcia, who is apparently a very good footballer in his own right, is a big Real Madrid fan - one of the former clubs of Ronaldo.

Garcia also took part in the honorary kick-off in the El Classico match between Real Madrid and Barcelona shortly after he won his maiden major title at The Masters in 2017.

We will no doubt be seeing a bit more of the Ronaldo celebration should Europe end up retaining the Ryder Cup this Sunday evening.

Here's how a number of golf fans reacted on Twitter to McIlroy and Garcia doing Ronaldo's 'siu' celebration:

Let’s hope there’s plenty of that on Sunday

Brooks & Bryson are probably on the team floor wrestling

RELATED: 9 REASONS WHY EUROPE HAVE ABSOLUTELY NO CHANCE OF WINNING THE RYDER CUP THIS WEEK

Need to see Gmac do it

I’ll never forgive him for this

Can see one of these guys breaking an ankle doing that

As a Portuguese golf fan, I approve

NEXT PAGE: BROOKS KOEPKA AND BRYSON DECHAMBEAU FINALLY EXCHANGE WORDS AT THE RYDER CUP - THEY LOOK LIKE BEST BUDDIES NOW!