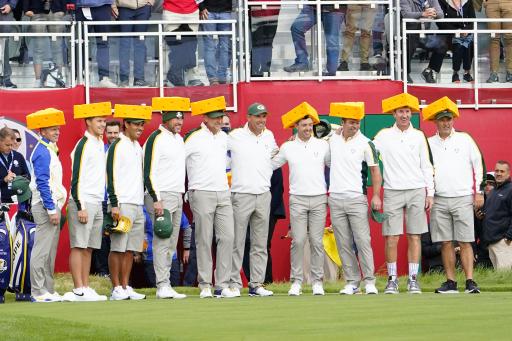 Team Europe have an uphill task of playing against an extremely strong US side at this year's Ryder Cup, but it is also made more difficult as there will be very few European fans to cheer them on.

In the past, the Europeans have relied on their strong support to carry them through, but this year there will be eerie silences when they hole important putts.

So in an attempt to endear themselves to the Wisconsin crowd at Whistling Straits, the European players wore big blocks of cheese on their heads during yesterday's practice day.

The state's cheesemaking tradition traces back to the 19th century and it has been ingrained into the state's history. Since 1910, Wisconsin has been America's largest cheesemaking state.

Wisconsin has continued to produce the most cheese in the country since 2013, creating over 600 varieties of cheese, so Padraig Harrington's side paid tribute to this part of history.

The players also donned white fleeces with green and yellow strips on them, paying homage to the Green Bay Packers who are an NFL team based in Wisconsin.

As they threw their cheeseheads into the crowd on the first tee, the American crowds loved the entertainment. So far, Ryder Cup week has seen great camaraderie and a team spirit that Team Europe is known for.

As we edge closer to the serious side of the Ryder Cup, both Team Europe and Team USA were out on the course yesterday practising and preparing for the event.

The matches start tomorrow and tonight, we will discover which pairs the captains have chosen at the opening ceremony.