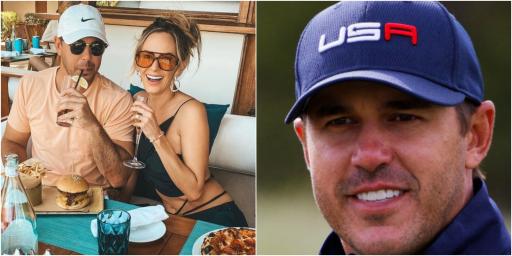 They are described as a power couple in golf - but who is Brooks Koepka's fiancée Jena Sims?

Koepka began dating Sims in 2017 and they have been together as he collected his four majors.

There was a hilarious gaffe after his US Open win in 2017 when she warmly embraced Koepka with a kiss just off the green.

The Fox commentator said she was his ex-girlfriend and had to be corrected.

Sims was born in Georgia on 30 December 1988 and went to Belmont University where she studied International Business.

She graduated from Winder-Barrow High School in 2007.

She is an actress who has a background competing in beauty pageants.

Sims, 32, is still involved in pageantry and runs a non-profit organisation called Pageant of Hope.

It hosts beauty pageants for children with cancer and other disadvantages.

In film, she played the lead role in Attack of the 50 foot Cheeleader, a comedy horror released in 2012.

She stars as a science student who takes a drug that makes her grow into a giant.

Sims has also starred in other films with WWE champion Rob Van Dam.

They got engaged last April and shared the news on Instagram.

Their photograph was captioned: "Forever is no joke."