Tiger Woods takes to Twitter to praise Steve Stricker's side following their record 19-9 victory over Europe. 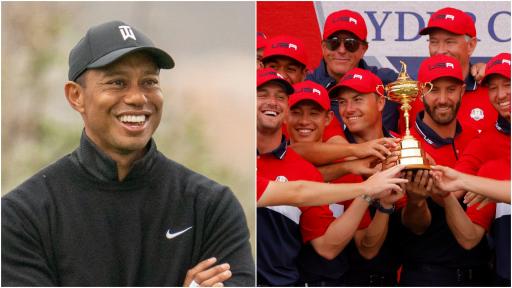 Tiger Woods has tweeted his congratulations to Steve Stricker's United States Ryder Cup side following their record 19-9 victory over Padraig Harrington's European side at Whistling Straits.

Woods may have not been on site in person this week, but he most certainly played his part in the background by offering advice and messages of support to his good friend Stricker and the rest of the team.

A dominant performance by @RyderCupUSA! I can’t wait to see and celebrate with all of you! Congrats to all the players, Vice Captains and of course Captain @stevestricker. pic.twitter.com/Xc0AsFzet2

"A dominant performance by the US Ryder Cup team. I can't wait to see and celebrate with all of you," tweeted Woods.

"Congratulations to all the players, vice captains and of course the captain Steve Stricker."

Woods was unable to attend Whistling Straits this week as he continues his recovery from leg injuries sustained during his horror car crash in Los Angeles back in February.

Team USA led 11-5 heading into the final day and then took eight points from the 12 singles matches for a 19-9 record victory in the modern era of the Ryder Cup (1979 when Europe was formed).

Xander Schauffele, who took three points from four this week, described one of the messages the team received earlier in the week.

"We got a nice message from Tiger last night, obviously we're not gonna reveal what it said," said Schauffele following his foursomes victory alongside Patrick Cantlay on Friday afternoon.

"But Pat and I knew, we referred to it a few times today and we knew what we needed to do.

"We knew he was fist-pumping from the couch.

"Whether he was on crutches or not, he's as fired up as any back at home so it's nice to have his support.

"There's no better role model, no better leader and (he's) just somebody you can always learn from.

"I saw him last week at home and just picked his brain on Ryder Cup and applied that here today."

NEXT PAGE: "THIS IS THE GREATEST UNITED STATES RYDER CUP SIDE OF ALL TIME"