Collin Morikawa secured the decisive half-point against Viktor Hovland that was needed to win the Ryder Cup for Team USA. 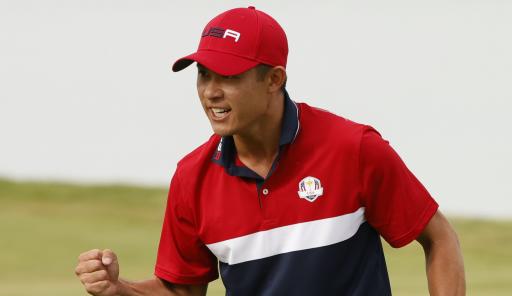 United States have won the Ryder Cup by a record margin, securing a thumping 19-9 victory over Team Europe at Whistling Straits in Wisconsin.

Padraig Harrington's Europe were only able to win three singles matches on Sunday as Steve Stricker's side ran out a record-winning margin of 10 points.

It marks the first time that has been achieved since Team Europe was formed in 1979.

Collin Morikawa, winner of The Open Championship in July, secured the decisive half point which meant Team USA reached the mark of 14.5 points needed to lift the trophy.

A series of American players were lining up in the afternoon to sink the winning putt. Dustin Johnson rolled his putt by the lip on the 17th hole against Paul Casey which would have secured the cup, but it ultimately came down to Morikawa.

He secured a half point by going 1 up against the phenomenal Viktor Hovland on the 17th hole, and although Morikawa was disappointed to halve the match on the 18th hole, the USA won the Ryder Cup.

"It was a full team effort, everyone contributed, everyone put in their full efforts to make sure this team was going to play well and coming out on top feels really good," said Morikawa.

"You can feel the fans, you really take that energy and having the home crowd advantage was huge this week, it was so nice to have that on our side."

Rory McIlroy did his best to hold back the American tide in the top match against Xander Schauffele. The Northern Irishman beat his rookie opponent 3&2 to claw back a consolation point.

Afterwards, McIlroy was moved to tears due to his disappointing display in Wisconsin, but unfortunately for him, Team USA kept putting red on the leaderboard.

"I love my team-mates so much and I should've done more for them this week."

An emotional Rory McIlroy reflects on ending his #RyderCup by winning a point for #TeamEurope in the Sunday singles. pic.twitter.com/3p7GY2bYJf

Jon Rahm earned maximum points for Harrington's Europe in all four pairs sessions on Friday and Saturday, but he ran out of steam on Sunday.

Scottie Scheffler won the first four holes against the World No. 1 and this proved to be a crucial stretch towards his 4&3 victory.

Sergio Garcia may have earned three points for Team Europe alongside Rahm in the pairs sessions, but he was humbled by a 3&2 scoreline to driving machine Bryson DeChambeau.

After Morikawa secured the trophy's residence in the States, Brooks Koepka saw out a solid 2&1 victory over Austrian rookie Bernd Wiesberger and was inches away from a hole-in-one on the par-3 17th hole.

Johnson then became only the third player in Ryder Cup history to win all five of his matches at the event. He overcame Paul Casey 1 up on the last hole.

Justin Thomas was relentless against Tyrrell Hatton, winning five out of the first nine holes which culminated in a 4&3 victory. On the other hand, captain's pick Ian Poulter maintained his unbeaten run in Ryder Cup singles matches by beating Tony Finau 3&2.

The score was 17.5 - 7.5 to Stricker's all-stars, but 11-time Ryder Cup player Lee Westwood restored some pride with a 1 up win against Harris English on the final hole in Wisconsin.

Tommy Fleetwood and Jordan Spieth enjoyed a fantastic showdown on the back nine and the pair settled for a half on the 18th green, with both players needing short putts for par.

Unfortunately for Matt Fitzpatrick, his wait goes on for a winning point at the Ryder Cup. He found the water on the final hole to lose 1 down to Daniel Berger and finalise the 19-9 result.

RELATED: DOES THE RYDER CUP PROVE THAT GOLF HOODIES ARE HERE TO STAY?