Bryson DeChambeau encourages the crowd to cheer after his interaction with Brooks Koepka at the Ryder Cup. 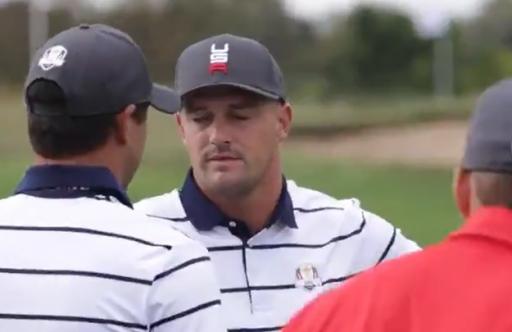 A video has emerged on social media of Brooks Koepka walking over to speak to Bryson DeChambeau on the range ahead of the Ryder Cup this week.

While it's difficult to exactly see what was being said, and exactly how long the two exchanged words, but the video posted by Ryder Cup USA ends with Koepka walking back across the range to his original spot and then DeChambeau encouraging the crowd to cheer.

UPDATE: HERE'S WHAT WAS REALLY SAID BETWEEN BROOKS AND BRYSON ON THE RANGE!

DeChambeau's golf coach Mike Schy had earlier in the week spoken about the American's desire to end his feud with Koepka, and the man himself made that clear during his press conference on Tuesday.

He even admitted that "something fun" was on the horizon.

DeChambeau's final say on the matter today has had golf fans wondering what exactly the "fun" could be all about?

Could Steve Stricker indeed be pairing them up together for some fourballs or foursomes action.

You would think if it was going to be either of the two, it would be the fourballs.

Or perhaps there will be a Match between Bryson and Brooks later this year?

We'll just have to wait and see.

NEXT PAGE: JUSTIN THOMAS ON TEAM USA - "YOU WOULD THINK WE ARE BEST FRIENDS"