Bryson DeChambeau and Brooks Koepka finally speak to each other at the Ryder Cup. 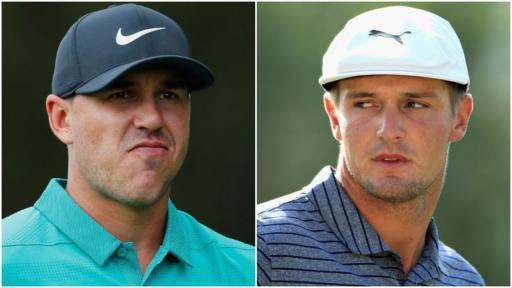 After months of bashing each other on and off the course, Brooks Koepka and Bryson DeChambeau appeared to make up on the range ahead of this week's Ryder Cup at Whistling Straits.

While some golf fans believe the video post was simply for the cameras, others consider the American duo could indeed be turning a corner - WATCH the video here, and wait for DeChambeau's hilarious reaction.

RELATED: PAIGE SPIRANAC BELIEVES BROOKS AND BRYSON WOULD PROVE AN "UNSTOPPABLE" PAIRING AT THE RYDER CUP

Although it was not exactly clear what was said between Brooks and Bryson on the range on Tuesday afternoon, a video has emerged on social media today shedding a little more light.

Okay, it's a parody video from forethetour on Instagram, but still, we are fairly confident it will make you laugh!

DeChambeau admitted he is working with Koepka to improve their relationship ahead of the Ryder Cup this week, as Team USA go in search of regaining the famous trophy.

He also said "something fun" between them is on the horizon.