WATCH: Shane Lowry TAKES A TUMBLE at the Ryder Cup

Thankfully Lowry got back up on his feet and carried on alongside Rory McIlroy on Day One at The Ryder Cup. 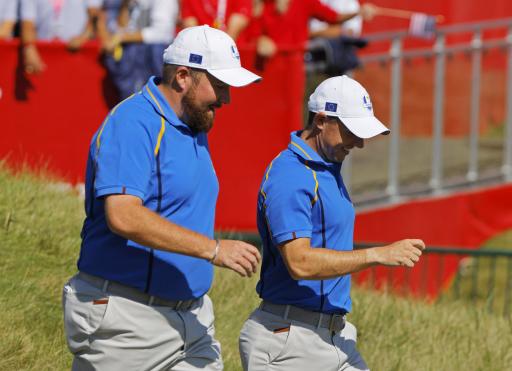 Shane Lowry took an unfortunate tumble down a hill on the 6th hole on Day One at The Ryder Cup.

Lowry, playing alongside Rory McIlroy in the afternoon fourballs, was waiting for a ruling after hitting an errant tee shot way left down the par-4 6th. He then turned round and slipped down the hill.

Thankfully he got back up on his feet and was able to continue.

Lowry is making his Ryder Cup debut this week having been handed a wildcard pick by European captain Padraig Harrington.

The Irishman has won five times on the European Tour with his last win coming at The Open in 2019.

He missed out on Friday's morning foursomes but was let loose in the afternoon fourballs alongside McIlroy, who suffered defeat with Ian Poulter earlier in the day.

Lowry made one of the putts of the day when sinking a tramliner for par to halve the 4th hole in his match against Tony Finau and Harris English.

So they couldn’t show Bryson’s drive but they made sure to show Shane Lowry taking a tumble. That’s mean. #RyderCup pic.twitter.com/SkpgzIgIC6

I hope Shane Lowry sinks the winning putt so I can truly laugh at the slip and fall like a child.

NOW WATCH: BRYSON DECHAMBEAU HITS A 417-YARD BOMB DOWN THE 5TH AT THE RYDER CUP