Spectacular course on the borders of four countries 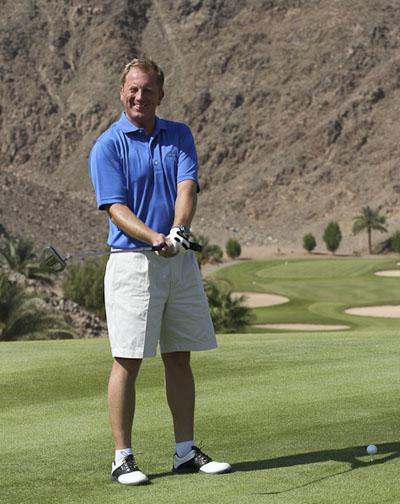 As party tricks go, it was pretty spectacular, when David Lewer, PGA pro and general manager at Taba Heights Resort in Egypt stepped on to the 12th tee and reached for...his putter!

Appropriate then that it was a Ping Craz-E model, complete with mallet head and blue polymer insert, with which he smote his tee shot almost 200 yards down this stunning 388-yard signature hole, the purple mountains of Sinai Peninsula framing its design.

“It’s not recommended,” he said with a grin, “but just goes to show that to play this course, you need every club in your bag!”

And a lot more besides, because the grass is unlike anything most of us will have experienced. It might look like the manicured sward we see on our TV golf coverage from the US and European Tours but it needs a special kind of technique to play from.

Because of the acute temperatures - balmy summer days in the winter and 40-degreee scorchers in summer - only a certain type of grass will survive.

It has an almost rubbery feel to it underfoot, something that I had not experienced before. You need to be on top of your game to play off this surface and if you don’t strike the ball first, the club will snag in the grass and cause your approaches to come up short.

As a consequence I often found myself faced with shots around the fringes of the green which presented another problem.
Even though the ball looked as if it was sat up nicely to be nipped off the fringe, I found my feet sunk a couple of inches into the grass.  This made chipping the ball even a short distance, quite difficult.

I discovered I had to play Phil Mickleson-type parachute lob shots with an open clubface, accelerating hard under the ball.

Well worth using the excellent practice facilities at the resort - BEFORE you encounter these sticky pitches.

A 30-foot wide, man-made storm drain also meanders its way through the course from the mountains down to the sea as an additional hazard to be avoided off the tee along with several lakes

Once on the greens I anticipated being at home with the strong part of my game. But yet again the grass presented itself with a new problem. Its growth is  strong and upright makes the undulating the contours difficult to judge.

But the more I played the better my reads of the grain became.

As a PGA pro myself, I have played many different types of courses and thought I had seen it all until I came to Taba Heights.

The views are truly breathtaking.  We played late in the day and the colours on the mountains as the sun went down were stunning as we looked across the Gulf of Aqaba to the far off coastlines of Israel, Jordan and Saudi Arabia.

Apart from mainly French and English visitors, Taba Heights customers include ex-patriates working for BAE systems in Jordan, who take the ferry from Aqaba across the nearby Straits.

From the 18th tee you can see the bar and from the bar, having received our customary cooling face towel, I could sit and reflect on a round that will live long in the memory. Not, so much for the score I recorded but for the lessons learned and the hospitality received.