Hurly Long of the DP World Tour told Matt from GolfMagic about his unique and fascinating meditation exercise that he uses for every shot. 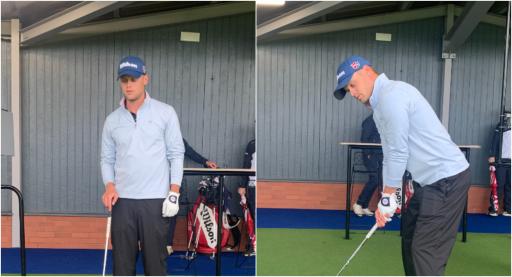 Hurly Long has been on the cusp of securing his first win on the DP World Tour this season and he is hoping the Betfred British Masters will bring him good fortune.

The German came tied third at the Ras al Khaimah Classic in February and in his next event, he came tied second at the Magical Kenya Open.

Long, ranked 228th in the world, spoke to Matt from GolfMagic about his special meditation technique which he uses before every shot.

The 27-year-old tries to remain as calm as possible on the golf course and to do this, he uses a calming method after he and his caddie have chosen the right club.

Learn how to chip like a winner on the DP World Tour!
How to NEVER MISS another short putt with Manolo Vega!

"One thing that is extremely important is focus. Everybody knows that suddenly you make two putts in a row and suddenly you play great because you made those putts.

"It's not that your swing changed or anything but you're in a great frame of mind. It's important to get into that as often as possible and so for me, I know what that means.

"It means a slower heart rate and a great focus, great concentration and the way I can achieve that in every shot is if I close my eyes and see a structure moving in my head in one direction as I breathe in and the other if I breathe out.

"It moves very slowly and the reason it moves slowly is that I play my best when my heart rate is very slow and I'm very calm and relaxed.

"I'm seeing that I have to focus and it's kind of a zen mind state and that allows me to hit very subconsciously and if you can, I think it is important that you use your subconscious mind as much as possible in golf as it is way more powerful than your conscious mind."

Visualisation and concentration are hugely important parts of your game and it was very fascinating to hear of Long's personal method.

He is currently ranked third in average putts per round and eighth in stroke average. He is also ranked 15th in putts per green in regulation, so it appears he is at his calmest when on the putting surface.

As you can see in the image below, Long has his eyes closed and he is becoming calm before he takes aim.

"It depends on how long you've done it and how much it's in there. The thing that happens in contention is the heart rate goes up dramatically, so things that I do to make me go slower, I have to do even slower," Long added.

"My steps into the ball are slower, it feels like I'm almost in slow motion but it helps me to get to where I usually am. It's not that I'm actually slower than usual, but it feels slower to me.

"Just before I address the ball, I stand about a yard behind the ball looking at the target. I close my eyes and it usually takes me five to eight seconds, whatever it takes for me to get into this inter-calmness.

Next Page: Learn how to chip like a winner on the DP World Tour winner!