DP World Tour player Greig Hutcheon showed Matt from GolfMagic a simple but effective drill on alignment and facing straight at the target. 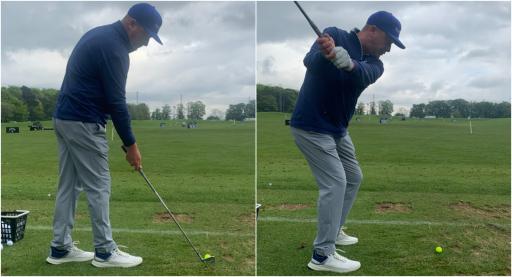 Scotsman Greig Hutcheon won the PGA Play-Offs in Ireland at the end of April and in doing so, he booked a golden ticket for many events on the DP World Tour.

The Betfred British Masters at The Belfry this week is the 49-year-old's first appearance on the DP World Tour since the BMW PGA Championship in 2017.

Matt from GolfMagic caught up with the three-time Challenge Tour winner at the famous venue of European golf to discover a simple but effective practice drill to help amateurs perfect their alignment.

Learn how to chip like a winner on the DP World Tour!
How to NEVER MISS another short putt with Manolo Vega!

"One of the biggest keys in golf is the initial aim of your golf club and it is so important to be precise and aim your club along with your ball and target line," said Hutcheon.

Related: This is how much tax golf icon Tiger Woods paid last year...

"One of the keys to that is when you stand directly behind your shot to visualise the shot you're about to play. Out in front of your golf ball, maybe two or three feet, find a spot on the grass. Sometimes it can be a daisy or you'll find something that you can use for your alignment.

"Once you step into the shot, you should align your clubface to that point. In a game that is extremely complicated, this is a simplification method that gains you a lot of precision and allows you to make the first step of the golf swing correctly.

"In a game that is endlessly complicated, some of the best players will always use a simplification method. Jack Nicklaus always used to talk about the alignment spot.

"You have to stand behind the golf ball, look at the shot you have, pick the spot that is appropriate to use as an alignment guide and when you address the ball, you're coming parallel to the golf ball.

"Rather than aiming at a target that is hundreds of yards away, simply line up with a spot two or three feet in front of the ball."

The arrow in the image above shows that Hutcheon has put a tee down about three feet in front of his ball. Just aim for this spot and this shows how a simple drill can improve your golf.