Learn how to chip like a winner on the DP World Tour!

Matt from GolfMagic joined Commercial Bank Qatar Masters winner Ewen Ferguson on the chipping green at The Belfry to discover the basics of his short game. 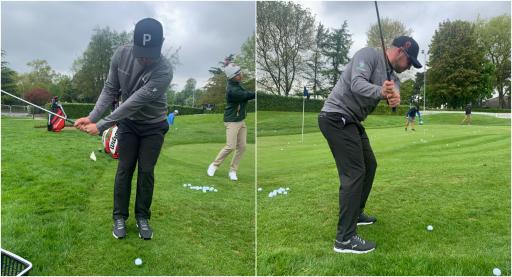 Ewen Ferguson experienced a breakthrough moment in his career when he won the Commercial Bank Qatar Masters in March.

Ferguson found an eagle and a birdie in his last three holes at Doha Golf Club to win by one shot. He currently sits at 186th in the world rankings arriving at the Betfred British Masters.

Matt from GolfMagic caught up with Ferguson at The Belfry to discuss the fundamentals of his short game and what he would advise young and upcoming amateurs to work on.

Weight, rhythm and fluency were very much key words in Ferguson's short game masterclass. As you can see in the images below, the Scotsman keeps his feet close together and adopts a compact stance.

DP World Tour pro Hurly Long and his meditation technique...
How to NEVER MISS another short putt with Manolo Vega!

His ball position favours his front foot and as the 25-year-old states, you need to focus on rhythm to avoid a jerky stroke which results in a poor chip.

"You need to keep your weight on your left side and sustain it throughout your hit and your rhythm. You need a really nice rhythm with your chip and that is key," Ferguson said.

"I think a lot of amateurs can get quick and jerky when they pitch and that causes a lot of inconsistency. I definitely see that when I'm playing at home with some friends.

"Weight on your left side, rhythm and keep your fluency through the strike.

"I spend a lot more time chipping on the course than I do on practice grounds. If I'm here the Monday, Tuesday and Wednesday, I'd spend an hour on the chipping green then on the course, I do a lot around the greens."

He also advises practising chipping out on the golf course as opposed to on a chipping green. In this way, you can experience different shots you could face at your home course.

"Being out on the course, even if you're just playing a practice round or having a few around the green or some shots that you've had before that you've struggled with," Ferguson added.

"I go back to a lot of places at my home course where I know some of the shots that I struggle with in general and recreate them. I'd drop five to 10 balls around, chip them up and see how many I get down in two or three, or if I hit the pin.

"You need to have every type of chip in the bag, obviously there's some you're more confident with than others and that's ok, as long as you know you can better with other stuff.

Ferguson gave us a valuable insight into his short game and the skills required to become a winner on the DP World Tour.