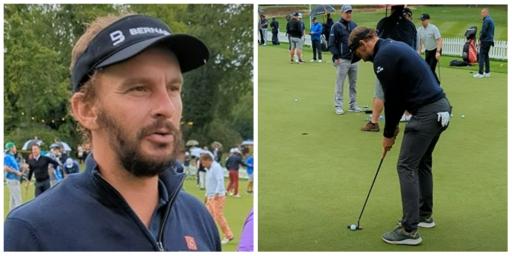 Speaking on the putting green at Wentworth, Luiten demonstrated the 'two to five drill' where he tests himself from two metres, three metres, four metres and five metres from the hole.

Each putt has to be holed from a different spot on the putting green from these distances in ascending order and the drill can only be completed once a putt from each of the four distances has been holed.

Luiten, 36, allows himself two chances at the putt from two metres, three attempts from three metres, four attempts from four metres and five from five metres. If he doesn't hole a putt within those attempts he has to start the drill over again.

A winner of two KLM Opens in his home country of the Netherlands, Luiten does this drill in every putting green practice session. He is ranked 32nd in putts per green in regulation on the DP World Tour in 2022.

"It's good to put something on it too. If you play for a little bit of money or for lunch, there's a little bit of pressure on it and that gets you focused as well," Luiten said.

Related Articles
DP World Tour pro Hurly Long and his meditation technique...
Learn how to chip like a winner on the DP World Tour!

"If you don't do it for anything, then your focus isn't at 100%. You want to do these little games with 100% focus like you would be on the golf course. Read the putt, walk around it, and see the lines.

"Hit one putt and the next should always be from a different spot, so you never practice from one spot.

"But I think amateurs can save a lot of shots by just avoiding three-putts or four-putts. I think doing these little drills will definitely get a couple of shots off your handicap.

"You can't do this enough and for a lot of amateurs, it begins just by spending time on the putting green. You do a drill or just try to make putts, that's fine. But if you don't put in the time, how can you expect to hole putts on the golf course? It comes down to practice, practice, practice.

"The more focused practice, the more efficient your time is spent. If I spend time on this putting green, not really focused, start to miss a couple of putts, your confidence goes down and you start to change things - it's important that when you practice, do it with 100% focus."