DP World Tour player Greig Hutcheon showed Matt from GolfMagic a great practice drill on how to maintain rhythm throughout your golf swing. 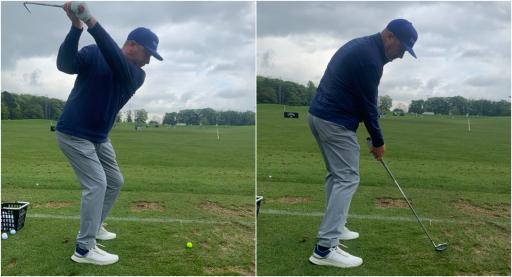 Scotsman Greig Hutcheon won the PGA Play-Offs in Ireland at the end of April and in doing so, he booked a golden ticket for many events on the DP World Tour.

The Betfred British Masters at The Belfry this week is the 49-year-old's first appearance on the DP World Tour since the BMW PGA Championship in 2017.

Matt from GolfMagic met Hutcheon on the driving range at the famous venue to discuss a drill that will allow you to perfect your rhythm.

Hutcheon identifies three seconds in your swing which should mark three key points: your takeaway, the top of your backswing and the hit.

"Rhythm is essential because obviously if you swing the club too fast, you've got no chance of getting your body into the correct position," Hutcheon said.

"That is the most common fault and generally when a player swings the club and their rhythm is too quick, the clubhead is thrown at the ball which means the club path has gone from the outside to the inside.

"That is the general thing that causes the average golfer to slice because they force the shot. They try to hit the drive too fast, too far and you have to think about it as three seconds.

Hutcheon outlines simple drills that are very effective. He believes that in your head, you should count one, two and three. In this way, you are regulating your swing to one constant speed.

Next Page: How to improve your alignment with DP World Tour player Greig Hutcheon