Meet the men who are more than just bag-carriers 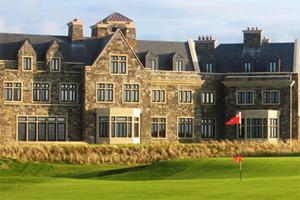 Did you hear the one about the two Irish caddies standing on the first tee of a links course in County Clare? As they watch the drive of an American golfer, he slices his ball and it flies out of sight into the dense rough. Says Hugh, the American’s caddie: “I’ll find that one Paddy, no problem.”

Paddy turns to Hugh and with a wry smile replies: “If that ball was wrapped in the best Limerick ham, even Lassie wouldn't find it!”

It’s 7.30am on a blustery Friday morning and inside the ‘caddie shack’ at Doonbeg Golf Club on Ireland’s dramatic West coast, the jokes are already flowing among the ‘Bagmen of Doonbeg’ - a highly trained cast of characters who can spot a 'lost ball' from a hundred paces and know the nuances of the course like the backs of their weathered hands.

Golf jokes aside, today is serious stuff. It’s the start of the tw-day Spring Member/Guest Tournament - the club’s biggest day of the year - and the place is buzzing. Just like Augusta National, the caddies are dressed in distinctive white overalls and green caps - they're cleaning clubs, filling bottles with sand to fill in divots, studying pin-sheets and tasking an inevitable drag on a cigarette. As well as filled with smoke, the air is electric.

During this annual competition, the caddie crew swells from the usual 40 full-timers to around 70 with freckled teenagers from the surrounding parishes making up the numbers.

The full-timers are a mixed bag and include ‘Big’ Bill Harnedy - no explanation necessary - and the jovial Hank 'Fluff' Malloy, with his passing resemblance to Jim Furyk’s bagman. When he arrives a colleagues suggests 'he looks like he’s sewn into his caddie suit.'

The there's Hugh Benn, who plays traditional Irish music on Friday nights at Lahinch and Michael Howard who cycles 10-miles into the wind to claim a bag. Paddy O’Shea, often stands for the town council in local elections, while brothers Michael and 'Cookie' Kelly step up for the round along with ex-boxer Joe ‘Moppy’ Burke - the only man to win the annual West-coast Caddies Match in successive years.

In addition to a healthy rivalry, strong camaraderie, a serious job attitude and the ‘craic’, what unites these diverse personalities, is being part of the Caddie Masters Programme - specifically developed to train and supervise new and existing caddies from the local area.

Doonbeg is currently the only course in Ireland employing the programme, already established at 27 courses in the US, including Pinehurst, Kiawah Island, Augusta National and Pebble Beach.

Says Brian Shaw, Doonbeg's head PGA pro: “At Doonbeg, they understand that a caddie spends more time with a player than anyone else and it helps build the club’s reputation. Our goal is to give our members and their guests the best caddie support in Europe.”