6 key holes at Pebble Beach where the US Open will be won and lost... 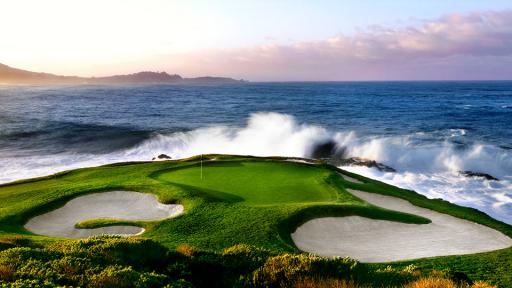 Pebble Beach might be considered tough, exacting and one of the most gruelling US Open tests of all time, but to many, it's the greatest piece of golfing landscape in the world.

In fact record 18-time major champion Jack Nicklaus was recently quoted as saying: "If I only had one more round to play, I would choose to play it at Pebble Beach."

With spectacular views at every turn, pristine playing surfaces, and a real premium placed on accuracy off the tee and a delicate, precise touch with the putter, it is little wonder Pebble Beach has been unanimously voted as the No.1 Public Course in the United States.

Pebble Beach Links is perched beautifully atop the cliffs of California's Monterey Peninsula and features holes six through to 10, as well as the iconic par-5 18th, all hugging the dramatic coastline.

Rory McIlroy has surged to the front of the betting market following his demolition display at the Canadian Open last week, and he shares the favourtism with course specialist Dustin Johnson, and Brooks Koepka, who is incredibly bidding to win a fifth major in his last nine, on top of become the first player to win three consecutive US Open titles since Willie Anderson in 1905.

Tiger Woods will also be looking to continue his major resurgence having won The Masters in April for his 15th career major, and he will fancy his chances having battered the field on this very course by a record 15 strokes at the 2000 US Open.

GolfMagic is giving away the official 2019 Callaway US Open Tour bag on our social media channels (Facebook, Twitter, Instagram) to one lucky winner who successfully predicts the winning score at Pebble Beach this week.

So what will that score be? Well, your guess is at good as ours. Much of that will depend on how baked out the fairways and greens get, to which the USGA has said it may be forced to syringe the greens should they need to.

And who knows, maybe there will be yet more controversy!

Let's take a look at the FIVE key holes that will likely play their part in deciding this year's US Open champion...

Those of you familiar with the AT&T National on the PGA Tour will be jumping out your seat at this one, given during that particular tournament this hole offers players the best possible chance of an early birdie.

Not in the US Open we're afraid. This time around the hole is playing as the second longest par-4 on the course.

Miss the fairway off the tee, and you'll likely be in deep rough or sand, and will face an almost impossible task of reaching the green in two blows.

A par-four here will very much feel like a birdie.

Starting the stretch alongside the edge of the ocean, golfers will want to thread their ball down the middle, keeping out of the sand down the left flank and of course, there is no future for anything going right in the H2O.

Find the short stuff off the tee, and you're faced with a blind second shoot into the green. Miss the fairway, and you'll be laying up some 100 yards short. The shot needs to ideally be a fade to best find the heart of the green, but anything short of the green should leave for a simple up-and-down.

With trouble all down both sides of the green, and no future long, the hole will no doubt result in some eagles, but a number of doubles too.

The par-3 seventh at Pebble Beach is easily one of the world's most recognisable holes.

This tiny par 3 certainly isn't long, but since it's completely exposed to the ocean, players will be forced to accurately judge the wind or find themselves in serious trouble.

It yielded more bogeys than birdies in 2010, and the odd five is out there if the wind is swirling.

No matter the player's score here, they will likely stop and take a moment to soak in the view. It's one of the finest in golf.