Bryson DeChambeau has brushed off the heckles he received at the Memorial Tournament and he hopes to compete with Brooks Koepka at the weekend of the US Open. 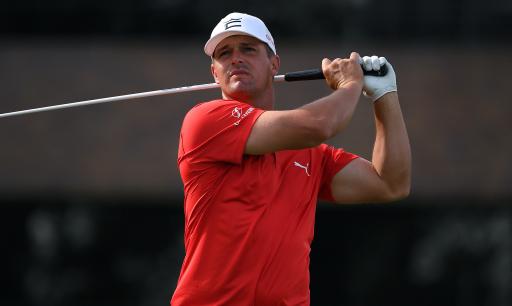 Bryson DeChambeau has described his feud with Brooks Koepka as "great banter" and he hopes to compete against his fellow American at the weekend of the US Open.

The feud has existed since the PGA Championship at Kiawah Island last month and it would appear that DeChambeau has always seen the brighter side of things.

The 2020 US Open champion previously said that the feud can positively benefit his chances of winning money in the Player Impact Program, due to the amount of social media interactions.

"I think it's fun," said DeChambeau.

"There's a point where it's great banter. I personally love it. I think that, as time goes on, I hope on the weekend we can play against each other and compete. I think it would be fun and would be great for the game.

"For me, I'm always going to be trying to play my game and not really worry too much about what other people are doing, but I think there are just times where, if it gets outside the scope of just integrity and honour, yeah, that can get a little interesting.

RELATED: "I DON'T CARE WHO I PLAY WITH": BROOKS KOEPKA ON US OPEN PAIRINGS

"At the same point in time, all of it's been good fun. It's been fun. Shoot, to be honest, people saying Brooksy's name out there, I love it. I think it's hilarious."

DeChambeau received chants of "Brooksy" at the Memorial Tournament at Muirfield Village two weeks ago, but he has aimed to brush these heckles aside.

There were rumours that the pair would be grouped together for the first two rounds at Torrey Pines this week, but they have been kept apart. DeChambeau will tee it up with Tyler Strafaci and Hideki Matsuyama, while Koepka is with Collin Morikawa and Justin Thomas.

The World No. 5 will be hoping that he can do what Koepka did in 2018 and defend the US Open that he won back in September at Winged Foot.

NEXT PAGE: DEBATE: 3-IRON OR 3 HYBRID - WHAT IS THE BEST OPTION FOR YOUR GOLF BAG?