US Open: Dustin Johnson does have one small regret about LIV Golf

Dustin Johnson spoke to the media briefly about LIV Golf after making the cut at the US Open at Brookline. 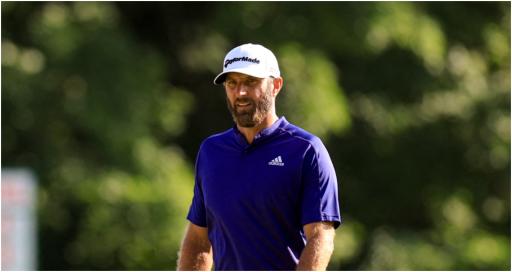 One thing you can expect with Dustin Johnson is that he rarely answers questions in too much detail.

Related: Phil Mickelson reacts to early exit from US Open

And at the US Open, this was no different. Johnson, 37, currently sits in T-31 before moving day after making the cut with two strokes to spare.

Johnson was the highest-profile LIV Golf player who made the cut at The Country Club at Brookline.

That was after Phil Mickelson made a swift exit after a brutal two days. "Wish I had played better," lamented 52-year-old Mickelson.

Other LIV Golf players to miss out on the weekend in Boston included:

The 15 LIV boys are, incredibly, LIV over par right now.

They finished the day LIII over par.

Newly signed LIV Golf players Bryson DeChambeau and Patrick Reed made the cut by one stroke. England's Richard Bland also made it through.

Despite being a man of few words, some reporters tried to dive into the topic of LIV Golf again with DJ on Friday.

The first question was whether or not Johnson noticed any difference from the fans this week.

Mickelson greeted the fans with approximately one million thumbs ups. He was also on the receiving end of a few chirps.

But for the most part, Lefty received a warm reception.

"No, fans have been great," Johnson said. "Obviously, this is a good sports town, and a lot of people come out and support the event."

The next question was whether or not he had a sense of relief now he's signed on the dotted line with LIV Golf.

Johnson offered: "Yeah, obviously it was a tough decision, but I feel very confident in the decision I made."

Did Johnson feel any tension coming into the US Open from LIV Golf?

"No, not at all," Johson said. "I was coming in here, preparing, getting ready to try and win a U.S. Open."

The final question was what Johnson thought about the timing of his switch to the Saudi-financed league.

As you might remember, a statement was releaased on Johnson's behalf in February confirming his loyalty to the PGA Tour.

Only for Johnson to change his mind at the last minute on the eve of the first LIV Golf event at Centurion Club. Then Mickelson joined him.

Johnson is reportedly being paid $150million for his commitment to LIV Golf.

He said: "I mean, it was kind of a little bit back and forth. If anything, I would have liked to have gone just a hair later, but it made sense to go when I did."

Next page: Brooks Koepka speculates on why people don't like him