Matt Fitzpatrick: What clubs did he use to win the US Open?

Matt Fitzpatrick, his caddie Billy Foster and his family celebrated an emotional moment for the Englishman who won the US Open in Brookline. 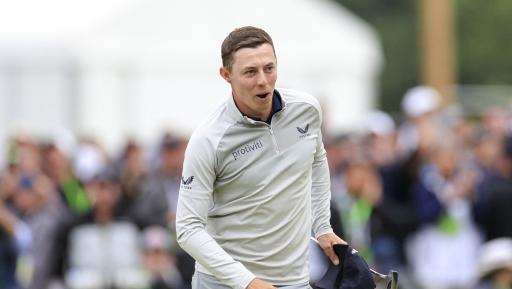 Matt Fitzpatrick is known as one of the most dedicated golfers in the game and he has been rewarded with a US Open title.

From notetaking on every shot he has ever hit to improving his ball speed by over 10 mph, you felt the Englishman's game was trending towards something special.

He began the final round tied for the lead with Will Zalatoris on 4-under and along with Scottie Scheffler, we saw a superb up-and-down battle that was unpredictable until the end.

All three players hit incredible shots and all three players made damaging mistakes. Fitzpatrick made crucial birdies on holes 13 and 15 when he had fallen behind Zalatoris.

The 27-year-old's 68 took him to 6-under and although Zalatoris hit a great putt on the 18th green, it didn't drop to force a playoff. Him Scheffler and Cameron Young have all made three runner-up finishes on the PGA Tour this season, the joint-most so far.

A ball striking clinic! @MattFitz94 hit 17/18 greens in regulation on Sunday, best in the #USOpen field.

His spectacular effort is our @Lexus Top Performance of the Day. #LexusGolf pic.twitter.com/oQ3YPgxxmA

Fitzpatrick became just the second player to win the US Amateur and the US Open at the same course. Jack Nicklaus is the only other player to accomplish this at Pebble Beach.

He is also the first player to win his first PGA Tour title at a major championship since Danny Willett at The Masters in 2016.

Matt Fitzpatrick - What's in the bag?