He has caddied for Tiger Woods, Seve Ballesteros, Sergio Garcia, Lee Westwood and Darren Clarke, but Billy Foster's first major triumph comes with Matt Fitzpatrick at the US Open. 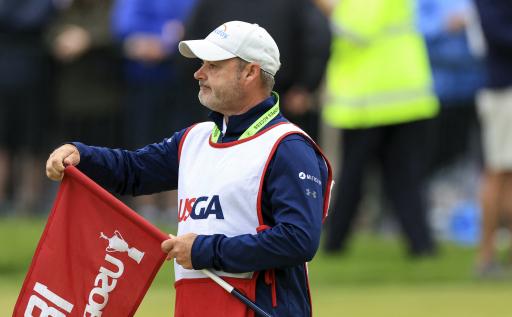 If you looked at the CV of Billy Foster and the golfers he has worked for, you would assume that he'd have a glittering list of major championships to his name.

But when Will Zalatoris missed his birdie putt on the 18th green at The Country Club in Brookline, Foster was overcome with emotion and disbelief.

This, in fact, was his first major triumph and it was finally delivered by Matt Fitzpatrick who put on a near-perfect display in Boston to win the US Open.

Foster kissed the flag on the 18th hole as he had finally accomplished what he couldn't do when carrying for so many top players in Europe and America for 40 years.

He began his career with the likes of Hugh Baiocchi and Gordon Brand junior who won European Tour events in the 1980s.

Related: Matt Fitzpatrick: What clubs did he use to win the US Open?

Absolutely incredible, Matt Fitzpatrick, thanks for a brilliant end to Father’s Day ⛳️

And to Billy Foster too, so close so many times, what a moment #USOpen pic.twitter.com/qGuBjxjE9d

Alongside Westwood, the pair experienced heartache at the 2009 Open Championship at Turnberry when the Englishman three-putted the 72nd green to miss out on a playoff.

The Masters of 2010 was another close call for Westwood, but Foster revealed after Fitzpatrick's win on Sunday that he thought about Bjorn's bunker mishap on the 16th hole in Sandwich at the 2003 Open Championship for months after.

"Unbelievably emotional, 40 years caddying. I knew somebody would get that giant monkey off my back," Foster told Sky Sports after Fitzpatrick's maiden major win.

"He played absolutely brilliant, he did my head in missing a few short putts but, you know, he didn’t need to win by four, one was good enough.

"It means a lot to me, Westy, Darren Clarke, Seve, they all had their chances over the years. Thomas Bjorn - I was caddying for him that day he left it in the bunker and that really hurt.

"I always thought he was good enough to win a major and this week he’s played unbelievable, and not even putted his best, which is incredible."

If you have tracked Fitzpatrick and Foster's relationship since they joined forces in 2018, you'll know it's one of humour, understanding and common ground with both men hailing from Yorkshire.

Foster joked that the 27-year-old missed a few short putts during the final round at The Country Club and they had common disagreements about which club to hit off the 18th tee throughout the week.

Fitzpatrick played impeccably in Boston and although Zalatoris did too, the Englishman drew on his experience of winning the US Amateur at the same course in 2013. He hasn't just won his first major, but he's delivered Foster's too.

"Two or three times it flashes in front of your eyes and you have a little tear filling up and you say ‘stop that, stop that. Don’t even go there, just get on with it," Foster said.

"But I’d be lying if it didn’t cross my mind two or three times out there today. You just want it so badly you can’t help but think about it. But we both did very well, we worked well out there today. There were no mistakes, not one. Everything was perfect."