Jon Rahm revealed that he received messages from Sir Nick Faldo and Padraig Harrington after he withdrew from the Memorial Tournament. 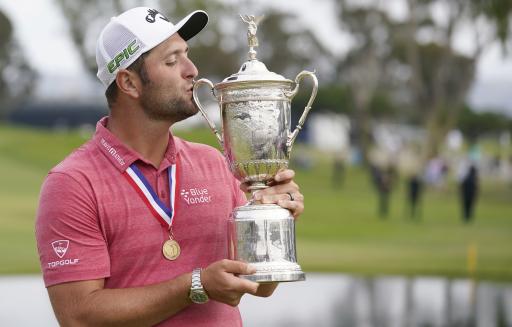 After his fantastic win at the US Open, Jon Rahm revealed that he received supportive messages from Sir Nick Faldo and Padraig Harrington when he withdrew from the Memorial Tournament with a positive Covid-19 test.

Two weeks ago, Rahm stormed into a six-shot lead at Muirfield Village after three rounds but as he walked off the 18th hole on day three, he was informed that he had tested positive for Coronavirus and had to withdraw.

This is why Rahm's bounce-back victory at Torrey Pines was made all the more satisfying and the Spaniard received support from some of European golf's biggest names.

"Padraig told me a story in which he was leading by five after 54 holes, signed the wrong scorecard and got disqualified," said Rahm

"He said he learned a lot more than he would ever learn from a win. Nick texted me and told me a story of how he was winning a tournament, leading by six with six holes to go and got disqualified as well, and how he learned from that and got a win the week after.

"I had in mind Padraig and Nick when I was out there on the course a couple of times knowing they won shortly after adversity, and I knew today was my day.

"I believed from the biggest setbacks we can get some of the biggest breakthroughs and that's why I stayed so positive."

The new World No. 1 golfer began the final round at the US Open three shots behind co-leaders Russell Henley, Louis Oosthuizen and Mackenzie Hughes.

He made a solid start to the fourth round with birdies on the first two holes, and he found another one on the par-5 9th hole to move to 4-under-par for the tournament.

His birdie-birdie finish on the final two holes was enough to finish above Louis Oosthuizen on 6-under-par, who once again could only manage a runner-up finish at a major championship.

NEXT PAGE: GUIDO MIGLIOZZI TALKS TO GOLFMAGIC AFTER HIS INCREDIBLE MAJOR DEBUT!