WHAT A GENT! Golf fans react to Phil Mickelson taking a chair over to sit with Jon Rahm's wife Kelley Cahill and son Kepa... 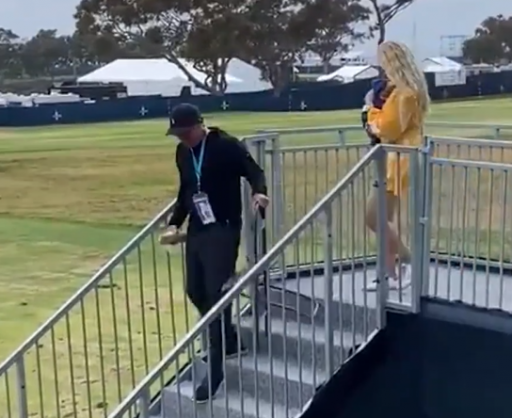 Golf fans have been reacting to a video clip of Phil Mickelson taking a chair over for Jon Rahm's wife Kelley Cahill and baby Kepa to sit and watch him hit balls on the range at the US Open on Sunday.

According to Golf Channel reporter Kira Dixon, who posted the video on social media, Mickelson went to find a chair for Kelley and Kepa to sit and watch Rahm hit balls on the range while the Spaniard waited for Louis Oosthuizen to finish his round.

As is it turned out, Oosthuizen would bogey the 17th after finding the penalty area, and despite a consolation bogey at the 18th, Rahm would finish one shot clear to land his first major title.

The viral clip has had nearly 1 million views on Golf Channel's Instagram page, and as you can imagine, the comments have been priceless. Check them out below:

"I see him pulling a chair up for himself."

"I think Phil's brother was Jon Rahm's college golf coach. They have a strong relationship."

"Too much class from Phil."

"Erm, it looks like he sat in the chair he brought over."

"He will never miss a moment to be on camera."

"Very classy that Phil stuck around to see him win."

"Loses by 17 shots, finds camera, brings chair over for self, makes Rahm's win about self, perfect Phil tool move."

"THE GOAT. He will get that US Open one day."

"What's in the other hand?"

NEXT PAGE: JORDAN SPIETH TAKES HUGE CHUNKS OUT THE RANGE AT THE US OPEN - GOLF FANS DISGUSTED!