OUTRAGE: Jordan Spieth TAKES HUGE CHUNKS out the turf on range at US Open!

Spieth officially lost the plot on the range at Torrey Pines - GREENKEEPERS LOOK AWAY! 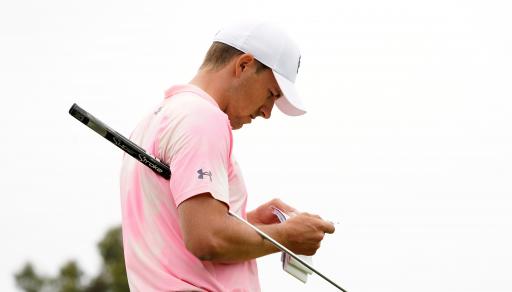 Jordan Spieth was caught doing one of the most bizarre things we have ever seen on the practice range before at the US Open last week when taking huge chunks of turf out the ground in quick succession.

Prior to his final round at Torrey Pines, the three-time major champion was seen innocently using a wedge and chipping balls off the turf in normal fashion. All seemed fine, until a moment of madness saw him go to town on the turf.

I mean, we know it was prior to the final round of the US Open and there are divots all over the place on the range, but surely this was a little too much from Spieth?

While we can't be certain exactly what Spieth was doing here, the consensus from one of our resident golf swing experts here at GolfMagic was the American was trying to lower his follow-through zone in front of the ball.

Only the manner in which he was going about it was far too aggressive for his liking.

"PGA Tour, please do something about this," said one irate fan. "Too many kids look up to this guy, and behavior like this is ruining Junior Golf. Be better is right!"

Another commented: "What the hell is he doing?"

"He looks dialled for the 12th hole at Augusta at least," joked another.

Others were more prepared to let Spieth off the hook.

"Relax everybody," said one golf fan. "Much too dry driving range soil. Looks like concrete. He could not hit divots / is in danger to injure his wrists, so took away the dry top layer. They should have watered it."

"Sometimes the frustrations of the game are just too much to bear," said another fan. "Not excusing anything but that wasn't exactly pristine turf, either."

Another golf fan said: "I believe he is trying replicate a horrible divot/bad lie. I don’t like it but I’m sure that’s what it is."

One even compared Spieth's actions to what he regularly sees down his local track: "It’s no worse than some some slasher hitting 200 balls and leaving and awful divot pattern...... it’s not the course, the range is built to get beat up."

Apparently Spieth wasn't the only one to be hacking turf out the ground at the US Open.

"I was there and watched this live," said one golf fan. "Ian Poulter did the exact same thing except he hacked a 2*2 square of grass and picked it up and threw it into the range. Everyone in the grandstands was wondering what the heck was going on."

Another golf fan said: "I saw Fitzpatrick do the same thing earlier today, the reason for it?"

NEXT PAGE: TIGER WOODS' EX COACH BUTCH HARMON TEACHES YOU HOW TO CORRECTLY THROW CLUBS ON THE COURSE!