Justin Thomas took aim at Bryson DeChambeau after discovering through GolfMagic that he had outdriven his fellow American at Torrey Pines. 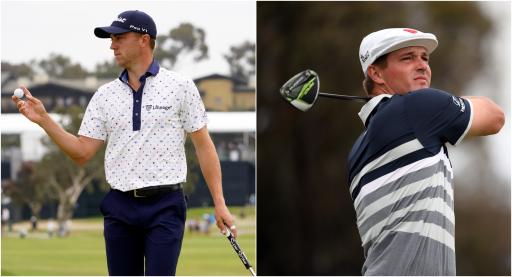 World No. 3 Justin Thomas was delighted to discover that he was above Bryson DeChambeau in the "longest drives of the week" at the US Open.

After GolfMagic revealed that Thomas' longest drive at Torrey Pines was 368 yards and DeChambeau's was only 366 yards, the 28-year-old wasted no time in letting his fellow American know.

"Sup @brysondechambeau hit the gym you wimp," said Thomas, while sharing the statistics on his Instagram story. DeChambeau responded to say that he needed to get back in the gym if he wants to outdrive Thomas in their next tournament.

Although Thomas outdrove DeChambeau last week, neither of them could get close to Wilco Nienaber, whose longest drive of the week was a staggering 380 yards.

At the Joburg Open in November 2020, the 21-year-old South African averaged 416.5 yards off the tee on the first day, so this is not the first time that he has thrilled fans with his long drives.

Both players were in contention to win the US Open during the final round on Sunday. DeChambeau moved into a one-shot lead around the turn in San Diego, but he played the back nine in 44 shots and finished nine shots behind Jon Rahm on 3-over-par.

RELATED: BRYSON DECHAMBEAU ENDURES SHOCKING BACK NINE AND A STREAKER AT THE US OPEN!

Thomas also couldn't make any inroads in the final round, he carded a 73 to finish on 2-over-par and in a tie for 19th place. This was the 14-time PGA Tour winner's first top-20 finish since the Valspar Championship at the beginning of May.

As for DeChambeau, it looked as though he could retain his US Open title like Brooks Koepka did in 2018. But despite his disappointment, his performance at Torrey Pines was a significant improvement on his appearances at the PGA Championship and The Masters this season.

NEXT PAGE: MACKENZIE HUGHES' GOLF BALL STAYS IN A TREE AT THE US OPEN!