Phil Mickelson was distracted by the use of video cameras during the first round on Thursday at Torrey Pines. 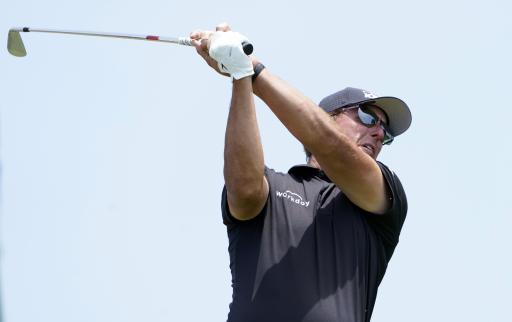 Phil Mickelson returned home to San Diego this week to attempt to complete his major grand slam at the US Open, but not everything went to plan on day one.

Lefty shot 4-over-par in a disappointing round and during his game, he found himself distracted by some golf fans who were trying to film him hit his shots.

On the 13th hole, Mickelson had to step away from the ball on his second shot a few times in order to regain his concentration due to the sounds of video cameras going off near to where he was stood.

"It's like part of professional golf. You have to learn to deal with it. I don't understand why you just can't turn that little button on the side into silent," said Mickelson.

"I probably didn't deal with it internally as well as I could have or as well as I need to. It's part of playing the game out here at this level. Certainly, I didn't do the best job of dealing with it.

"It's the video ding. They just kept going off. Look, it did it the next three or four shots thereafter, too, so it's not like that's the first time, it's just that you had to ask three times.

"It's part of professional golf. You have to be able to let that go and not let it get to you and be able to kind of compose yourself and regather your thoughts and so forth, but they certainly didn't do me any favours, either."

Playing alongside Xander Schauffele and Max Homa, the six-time major champion began his first round on the 10th hole and made three bogeys in his opening six holes.

Mickelson made two more bogeys on his second nine holes to finish with a 75 and eight shots behind the leaders on 4-under-par. It is fair to say that if he is to complete his grand slam at the US Open, he will need to improve on Friday.

NEXT PAGE: BRYSON DECHAMBEAU PRACTICES IN DARKNESS AFTER FIRST ROUND AT THE US OPEN