RUMOUR: Brooks Koepka and Bryson DeChambeau PLAYING TOGETHER at US Open?! 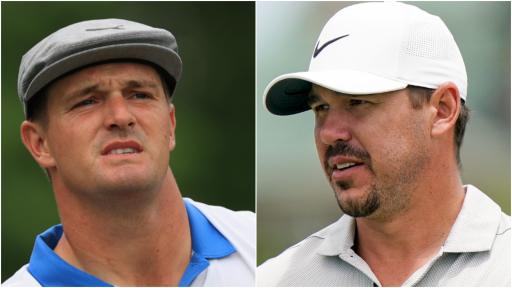 United States Ryder Cup captain Steve Stricker has "heard a rumour" that Brooks Koepka and Bryson DeChambeau will be playing together for the opening two rounds at next week's US Open at Torrey Pines.

In an interview with Wisconsin Golf's Gary D'Amato, Stricker said: "I heard a rumour that they're going to be paired together at the US Open. That's what I heard. I don't know if that's true or not, but that would be interesting."

Stricker, in fact, wants to step into a three-ball with both Koepka and DeChambeau at some point on the PGA Tour this season so that he can try and act as peacemaker following their recent war of words in person and on social media.

"I told my wife (Nicki), maybe the best thing to do is I get paired with them at a tournament round and see how it goes."

WATCH: BROOKS KOEPKA ROLLS HIS EYES AS BRYSON DECHAMBEAU WALKS PAST HIM

With just three months to go until the Ryder Cup, with both DeChambeau and Koepka locks for the US team, Stricker is said to be less than amused with their social media spat.

"Yeah, it's not making my job any easier, you know?" said Stricker.

"I haven't talked to either one of them, but will have to at some point. We'll see where it goes from there.

"Hopefully they can put their differences aside for the week, be big boys and come together as a team."