US Open: Did Phil Mickelson and Bones Mackay blank each other in Brookline?

According to a reporter on the ground at The Country Club in Brookline, Phil Mickelson and his ex-caddie Jim "Bones" Mackay blanked each other. 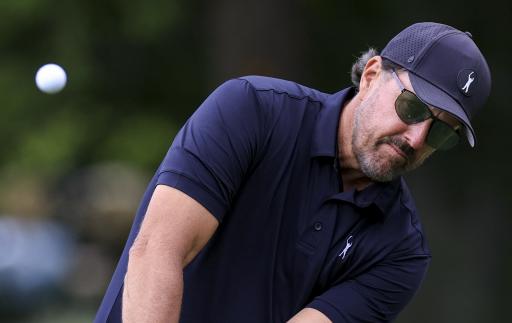 Six-time major champion and LIV Golf rebel Phil Mickelson and his ex-caddie Jim "Bones" Mackay reportedly blanked each other during the second round of the US Open.

According to Christopher Powers of Golf Digest, Mickelson was standing on the 8th tee box when Bones appeared walking with Justin Thomas to the 10th tee box at The Country Club.

Powers also reported he caught a glimpse of Thomas and Mickelson's playing partner Shane Lowry giving each other an anxious look.

He described the moment as "awkward." Just last month, Bones combined with Thomas to win the US PGA Championship at Southern Hills.

Mickelson was the defending champion of the event and chose not to compete, but he won the Wanamaker trophy at Kiawah in 2021 with his brother Tim on the bag, not Bones.

Related: US Open Golf 2022 LIVE: 2nd Round Scores and Updates: Rory McIlroy in the hunt

Phil standing on 8 tee and Bones appears from the hill walking up to 10 tee and I’ve never seen two people try harder not to make eye contact with one another.

JT and Lowry glance at each other and gave each other this face . About as awkward as it gets

The awkward look between the pair could be a product of a frosty relationship which eventually broke up in 2017 after 25 years. They won five majors together.

According to one of the many, many stories that Alan Shipnuck revealed in Mickelson's new biography "Phil: The Rip-Roaring (and Unauthorized!) Biography of Golf's Most Colourful Superstar, Mickelson owed Bones up to £720,000 when they split.

Another detail from the controversial biography said that Mickelson never gave Bones any of the 18th hole flags from his major wins, whereas Bones took home the one he and Thomas won together in Tulsa.

Lefty had a tradition of giving them to his grandfather. He eventually sent each of the mementoes to Bones when they split up five years ago, but they were plastered in autographs. Bones never displayed them in his house.

These reasons could explain why there could've been tension between the pair. It is a sad indictment of where Mickelson currently stands with his personal life which he refused to elaborate on last week at the first LIV Golf Invitational event.

Next Page: US Open: USGA confirms Saudi golf rebels could soon be blocked from competing