US Open: USGA confirms Saudi golf rebels could soon be BLOCKED from competing

USGA chief executive Mike Whan believes there could become a time when LIV Golf rebels are banned from competing in the US Open. 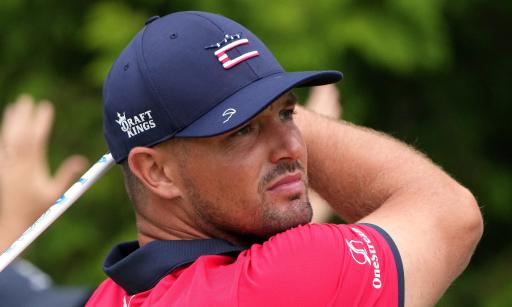 USGA chief executive Mike Whan believes the Saudi golf rebels competing in the new LIV Golf Invitational Series could soon be blocked from playing in the US Open.

Whan was quizzed by the media ahead of this week's third major of the year from Brookline whether he could envisage a time where those competing on the Saudi-funded LIV Golf circuit could be blocked from participation at a US Open.

While Whan could not confirm anything, he did replied with a firm "Yes".

He was then asked to elaborate by the media, to which he responded: "I just answered the question. Could I foresee a day? Yeah, I could foresee a day. Do I know what that day looks like? No, I don’t.

"To be honest with you, what we’re talking about was different two years ago, and it was different two months ago than it is today. We’ve been doing this for 127 years, so I think the three of us and everybody else that we work with need to take a long-term view of this and see where these things go so we’re not going to be a kneejerk reaction to what we do.

"But the question was: ‘Could you envision a day where it would be harder for some folks doing different things to get into a US Open?’ I could. Will that be true? I don’t know but I can definitely foresee that day."

A number of LIV Golf players are competing in the US Open this week including Dustin Johnson, Phil Mickelson, Bryson DeChambeau, Martin Kaymer, Louis Oosthuizen and Sergio Garcia.

Of the Saudi golf rebels, Johnson enjoyed the best opening to the tournament with a 2-under 68.

But it was a day to forget for some of the others, especially birthday boy Mickelson who carded a disastrous 8-over 78 to all-but end his hopes of completing the career grand slam at Brookline.

Next Page: US Open R2 Tee Times and Groups