"One of the worst shirts ever made for golf" - golf fans react to Patrick Reed's shirt at the US Open. 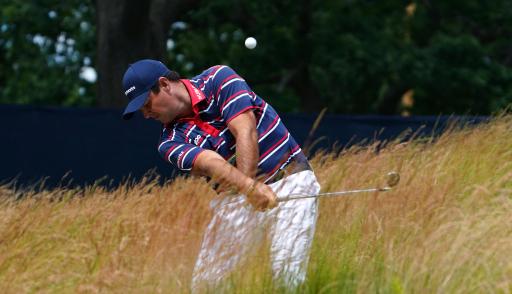 Golf fans have been reacting to Patrick Reed's interesting golf shirt on day three of the US Open at Brookline.

Reed rocked up to Brookline on Saturday wearing a G/FORE Offset Stripe Polo shirt from the brand's latest 2022 range.

Check out the very much "offset stripe" look below:

Judging by the responses to Kyle Porter's tweet above, it's fair to say very few golfers out there would have chosen to wear it.

"One of the worst shirts ever made for golf," commented one golf fan.

Another said: "Sad thing is, he went out and found this at Dicks."

"Only makes sense if Justine picked it out for him," wrote one golf fan.

Another commented: "Dude sure wears a lot of red, white, and blue for a guy who will be cashing Saudi checks."

The story of Reed when it comes to equipment and apparel has been a complex one over the last 12 months.

But to bring you up to speed, Reed signed a deal with Castore Sportswear ahead of the 2021 Masters and that deal lasted all of a couple of months, at least from what we have heard.

Anyway, Reed went back into G/FORE shirts but he is not paid by the brand to wear them.

He just likes them.

When it comes to his most recent equipment deal, he signed with PXG at the start of the year having been a free agent for a number of years since leaving Nike Golf.

Six months later, and Reed decided to drop his PXG driver - the one he raved about at the start of the year - from his bag.

Now PXG have taken their logo off the front of his cap. So that partnership appears to have ended now, too.

Reed last week announced he would be signing up to play in LIV Golf events.

That means he has now been banned by the PGA Tour until further notice.

Next Page: Justin Thomas drops multiple F-BOMBS after not taking relief from a drain in the middle of the fairway