US Open R3: Matt Fitzpatrick and Will Zalatoris lead Jon Rahm by one

Jon Rahm blows up on 18 as Matt Fitzpatrick and Will Zalatoris share the 54-hole lead at the US Open. 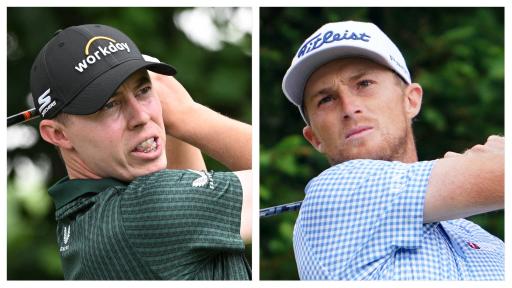 Defending champion Jon Rahm made a double bogey on the 18th hole to hand Matt Fitzpatrick and Will Zalatoris the 54-hole lead at the US Open.

On a brutal day of Saturday scoring at Brookline, Rahm rallied late in the day with birdies at 14, 15 and 17 but he then thinned his fairway bunker shot into the lip en route to a double-bogey six at 18 to card a 71.

That sent Rahm back to 3-under par for the tournament and one shot behind Zalatoris and Fitzpatrick on 4-under par.

Zalatoris posted a brilliant 67 earlier in the day, a 54-hole score that was matched by England's Matt Fitzpatrick after a solid 68.

Fitzpatrick, 27, and Zalatoris, 25, are both going in search of their first victory on the PGA Tour. Fitzpatrick does, however, have seven wins to his name over on the DP World Tour, and perhaps most importantly, he won the 2013 US Amateur on this very course.

Both Fitzpatrick and Zalatoris have been knocking on the door of late, so their performances so far are certainly of no surprise this week.

Zalatoris lost out in a playoff to Justin Thomas at the US PGA Championship last month among a number of impressive performances, while Fitzpatrick has notched three top-10 finishes in his last four starts.

Rahm, 27, is looking to repeat the feat of Brooks Koepka and Curtis Strange by defending the US Open.

World No.1 Scottie Scheffler had vaulted to 6-under par when holing out for eagle at the par-5 8th but he dropped four shots to the house from there and he lies at 2-under par alongside Keegan Bradley and Adam Hadwin.

It was a day to forget for Rory McIlroy who carded a disappointing 73 and the Northern Irishman has it all to do from 1-under par alongside Sam Burns, who carded a 71, and 36-hole leader Joel Dahmen, who slumped to a 74.

Collin Morikawa also held the 36-hole lead but the two-time major champion had an even worse day as he tumbled out of contention with a 77.

Who do you think will win the US Open? Share your thoughts and comments over on the GolfMagic social media channels.