US Open R2: Rory McIlroy remains in the hunt as Collin Morikawa leads

Collin Morikawa and Joel Dahmen hit the front after 36 holes but Rory McIlroy, Jon Rahm and Scottie Scheffler are all hot on their heels. 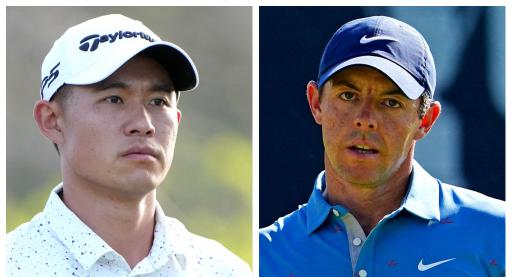 Rory McIlroy says he was "really proud" that he shot under par in the second round of the US Open, especially after making one of the best double-bogeys of his life on the 3rd hole at Brookline.

McIlroy had something of a horror show in the deep greenside rough on the 3rd hole.

The 2011 US Open champion duffed his third shot in front of him and he then whiffed his fourth shot as the ball sunk further to the bottom of the rough.

In serious danger of throwing himself out of the tournament at the time, McIlroy chopped his ball out to some 30 feet and he duly drained the putt for an incredible double bogey.

We have ALL been there

Rory McIlroy was hacking at his ball in the long grass for some time, but ends up with a double-bogey thanks to a stunning 20-footer pic.twitter.com/MjZzDfB76Q

That moves McIlroy to within just one shot of the lead currently set by two-time major champion Collin Morikawa, who posted a superb 66, and Joel Dahmen, who carded a 68.

"Yeah I just missed it in a spot you couldn't," said McIlroy, reflecting on his double-bogey six at the 3rd hole with Sky Sports Golf's Henni Zuel.

"That first one was a decent lie and just not the place to miss it. Second one, yeah went straight under that one. Actually the one that sat all the way down the bottom was the one I got out.

"Hideki putted before me so got a decent read, but it was massive. There aren't many double-bogeys you give a fist pump but that was important to hole that and came back really well from that."

He added: "I knew I had a lot of chances coming up, the short 5th, the par-5 8th and a few chances on the back nine. I kept telling myself I had chances. I wanted to get back to even par for the day thru 9, and didn't quite do that.

"I made two bad swings, the second shot on 3 and the tee shot on 10... they cost me three shots. But how I played the last eight holes, I am really proud... to get in under par and stay right there on the leaderboard."

The first #USOpen eagle of Jon Rahm's pro career moves him within a shot of the lead. pic.twitter.com/PnMgPZEJ2K

Defending champion Jon Rahm joined McIlroy on 4-under par after a solid 67.

World No.1 Scottie Scheffler vaulted into contention after carding a 67, while Sam Burns also posted a 67 to move to 2-under par.

Viktor Hovland missed the cut on 7-over par after playing his final 11 holes in 9-over par, and Phil Mickelson had a birthday week to forget at 11-over par as his wait to complete the career grand slam goes on for another year, now at the age of 52.

Next Page: Was Brian Harman fortunate to escape a penalty for doing THIS in the rough on day two at the US Open?